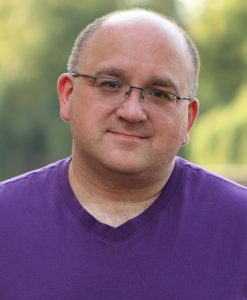 Alasdair Stuart is a genre fiction writer and pop culture analyst. His nonfiction has been published by Tor.com ,Uncanny Magazine, and Barnes & Noble. His game writing includes ENie nominated work on the Doctor Who RPG and the upcoming After The War from Genesis of Legend. He co-owns the Escape Artists Podcast Network and hosts their horror show, PseudoPod. His most recent publication is The PseudoPod Tapes Volume 2: Approach with Caution, the second collection of expanded essays from PseudoPod.  He blogs at www.alasdairstuart.com, has a pop culture newsletter at The Full Lid and is on social media at @AlasdairStuart.

Tell us one thing you loved or found fascinating about a place you have lived.
When I went back to the Isle of Man after eight years away, it absolutely freaked me out that you can stand on the mountain in the centre, turn in a circle and see ocean everywhere around you.

What did you want to be when you grew up (other than a writer if that was an option)?
-Field tester for Action Force toys.
-Train driver.
-Astronaut (Duh).
-Clark Kent.
-Professional wrestler. But I was a nice kid and therefore not allowed to do anything rambunctious. Or that involved chair shots.

Which super hero would you most like to be and why?
Superman. I’m a big, polite country boy who writes things and wears glasses. Him and me have a certain commonality of design to us. Plus, part of me hopes, if I die well in battle, to wake up in the Daily Planet bullpen. That would be a fine Valhalla, I think.

It’s finally happened! The zompoc is here! Name four things in your ‘go bag’ and your primary weapon.
-Wind up/Solar radio. If there are other people out there I want to know. If nothing else the endless repeats of the Shipping Forecast will be a restful background accompaniment to slow motion zombie killing montages.
-Utility keyring. I am, to my mild shame, building this at the moment. I’ve got a thing for those ‘Here are eight tools on a penny!’ style keyring tools and am currently planning a keyring of them that’ll include a pen, a file, a pair of tweezers, a torch, a multi-screwdriver, a miniature lighter and so on.
-A solar powered torch. There’ll be a holdout on the utility key ring but I want a full size one, firstly because like the Navy SEALs say two is one and one is none and secondly because a decent sized solar Maglight or something similar is a hell of a melee weapon.
-A spare pare of waterproof, good shoes. I’ll be doing a lot of walking (At least until Marguerite and I can make it to the tank place in Market Harborough) so a spare pair is a good plan. Also good currency if needed.

What is your go to comfort book or writer when you can’t settle into anything new?
Here’s an awful admission for you. I don’t really re-read stuff. It tends to be one and done for me. That being said, there are several comic series I touch base with regularly. The Ellis run on Stormwatch is very important to me, as is Transmetropolitan. The latter is the book that taught me that one of the bravest things you can do is write. Nothing feels as bad if it’s captured and defined by words and the moment you do that is the moment you start getting control of your life back.
And yes, I’ve considered several of Spider’s tattoos more than once. But not yet…

Now, movies? Movies I come back to again and again. Speed is a go to for me simply because it’s ridiculously fun and you can play spot the Whedon dialogue. Scott Pilgrim gets a regular turn because it’s a musical with punching instead of songs and Kiss Kiss Bang Bang gets rewatched regularly because it’s the single most brilliant film of its sort in the last twenty years.
Pacific Rim as well, because I’m one of the people who liked it and because I suspect there’s no better ‘plucky humans beat the odds’ movie in existence or on the way anytime soon. Also the theme tune is EPIC.

What is the single most important thing to your writing process?
Knowing where I’m going and knowing what I don’t need to know yet. I’m a process guy and my issue is often that thinking something through feels like execution. If I can think something through to keep it interesting but not so much I feel like it’s done then I can actually finish it.

If you could collaborate with any author who would it be and what would you write together?
Henry Rollins, because his work taught me almost everything I know. We’d write either the single funniest novel about over articulate, tattooed dudes ever written or a cook book that somehow also discussed jazz and movies.#

Interviews with and articles by Alasdair

Interview on The Eloquent Page with Alasdair Stuart

Alasdair Stuart talks foxes in your pocket at SFX

One Reply to “Alasdair Stuart”