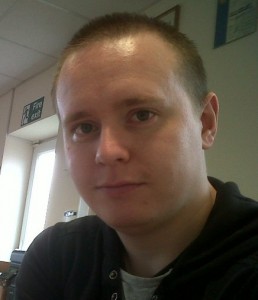 Alec McQuay is a horror, fantasy and science fiction writer hailing from Cornwall in the south-west of England; an area renowned for natural outstanding beauty and the worst internet connections in the country. Capable of going off at odd tangents, bizarre flights of fantasy and generally being incapable of taking things like bio-writing seriously, Alec spends most of his time scribbling notes and ideas on his phone and talking the ears off his wife and friends about whatever mad-cap scheme he intends to write next.

Alec’s novella  ‘Spares’ is already available and his debut novel, the steampunk adventure ‘Emily Nation’ will be released in 2014.

Cornish culture. We’re a laid back bunch for the most part but we’re grafters, and we’ll go to war for our rugby teams or any suggestion that we didn’t invent the pasty. I love the geography, the slang, the accent, the food, the cider, the history and I love how the old language is being brought back.

Expect a lot of local influence in my work, even if it’s fairly well hidden.

I wanted to be an army officer. It didn’t work out for a variety of reasons but I grew up wanting to look after people and kick the living snot out of bad guys.

Which super hero would you most like to be and why?

Spawn. Suitably gnarly for my tastes and with the power of hell at my command, how could I fail? I’ve always loved the Green Lantern’s powers but I’m too crude to join The Lantern Corps. A ring that can form anything in my imagination into a glowing, green reality? Not unless you want a version where baddies are crushed between enormous gorilla testes.

Plastic bottle filled with the neatest alcohol I can get my hands on for cleaning wounds, sterilising and possible help with fire lighting. Writing pad and pencil. A multi-tool that includes a fire starting steel, blade, tweezers, pliers, etc. Gerber do one and it’s OH SO PRETTY. Book identifying what can be found locally that’s good to eat, what’s poisonous, what can be useful etc. Basic survival manual type shiz.

For a primary weapon it’s got to be a shotgun for me, either a Spaz-12 or a Mossberg tactical with buck shot or similar. Stopping power is the thing (once you’re in a team you can think about other options like long range rifles etc) and on its own it’s a highly adaptive style of gun. Cheekily, I’d have to have a decent blade as a sidearm, something like a parang-style machete. A blade may not be your BEST friend in a scrape against the undead, but they never run out of ammo, and even blunt it’s still a club.

Terry Pratchett’s Night Watch or Jingo are amongst those rare books that don’t get old, no matter how many times I read them. Great characters, vibrant setting and one of those payoffs at the end that makes you want to randomly high-five some random person.

Control of my environment. I can write pretty much anywhere as long as I have headphones, music and can be fairly sure of being left alone. Being interrupted by people asking random questions (especially “what are you working on?”) makes me want to sharpen a biro and perform random, surprise tracheotomies on people.

There are a few of my fellow Skulk members that I’d love to collaborate with, but from the high-flyers it would probably be a graphic novel series with Alan Moore, with Jamie Hewlett (original Tank Girl artist) doing the drawing. I have a back-burner project that I have high hopes for and I think with those two gents on board it would be the best thing I’d ever be likely to produce. I really, really want to try and get a graphic novel off the ground at some point (really coming to love the comic book medium) and both these guys are partially responsible for the love I have for them. Came to comics a bit late having only really been into The Beano as a child but fully intend to throw myself in head first.

Alec McQuay shows off his shelves on The Overflowing Library