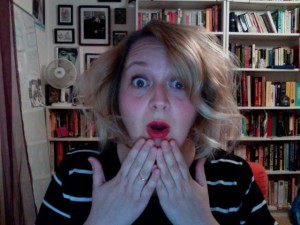 Chloë Yates writes odd stories (she’ll have a bash at anything, given half a chance). English born, she currently lives in the middle of Switzerland with her bearded paramour, Mr Y, and their disapproving dog, Miss Maudie, surrounded by books, effigies of owls, and the great god Ganesh. She’s currently working on her edition of Feral Tales for her fearless leader at Fox Spirit as well as her novel, The Chronicles of Douchester: Iggy Rising, both due out 2014.

Find out more about her via her invariably ranty blog http://www.chloe-yates.blogspot.com or her website, which can be found down the rabbit hole at http://www.chloeyates.com

Tell us one thing you loved or found fascinating about a place you have lived.
I live in the middle of Switzerland so I’m obscenely lucky. It’s beautiful, and I’m not just talking about snow and mountains. Any season is worth seeing in Switz. The country and its people have a conservative image, but there are all kinds of odd things here that make a lie of the stereotype. For example, the bar Elvis et Moi in town is a gaudy retro heaven, while down the road in Gruyères, a walled town with incredible views, you can drink an Alien Coffee in the Giger Café, which is opposite the HR Giger museum. I love that while the Swiss are low-key, they have a rich vein of oddness that isn’t scorned or derided, it’s just a part of them.

What did you want to be when you grew up (other than a writer if that was an option)?
I was a precocious reader as a kid and my first “grown up” book was Jane Eyre, which I read when I was 5 and a half. I remember reading the introduction to the Penguin edition I had and while I didn’t understand what it was knocking on about, I very much wanted to be the person who talked about stories for a living. In a fancy pants way. It was either that or I liked the sound of Professor Yaffle from Bagpuss. Professor Chloe. Sounds good, right? Shallow. Other than that I wanted to be Doris Day in Calamity Jane. Or The Mighty Thor’s pants.

Which super hero would you most like to be and why?
Bananaman. Then reality could meet the fantasy in my head where the Goodies narrate my everyday life.

It’s finally happened! The zompoc is here! Name four things in your ‘go bag’ and your primary weapon.
I already have my weapon ready. I have a big stick that was carved into a baseball bat for me when I was a kid. It’s big and heavy and I could knock a good portion of shit out of the undead with it.
What would be in my bag? A big bottle of Dettol (doubles as a blunt instrument), one of those multi-tool things Alec’s banging on about with a firestarting thingummy and an everlasting torch feature (I bet the Swiss Army have one), a can opener and a sewing/first aid kit. Five’s my lucky number though, so I’d have to have another item too. Probably a good pair of spare socks. Wet socks are all the miserable.

What is your go to comfort book or writer when you can’t settle into anything new?
I don’t really have a comfort book or writer and I very rarely re-read things, except Jane Austen, who I can read until the cows come home. The Talking Parcel by Gerald Durrell was the book I read and re-read over and over as a kid. I have a first edition of it (which I bought in Looe, Cornwall for a fiver!) and, while I haven’t read it since I was 8, owning it makes me feel better about the world. I do always try to have a Christopher Fowler Bryant and May novel ready and waiting for one of those dark days when I just can’t decide on a book to read. They are, without exception, fucking brilliant.

What is the single most important thing to your writing process?
Getting it down on the page. Once that’s done, it might turn into something completely different, but if I don’t get a beginning, middle and end of some sort down, I get lost in a fog of my own ballbaggery. I hate being a ballbag, drives me mad.

If you could collaborate with any author who would it be and what would you write together?
Enid Blyton. Woman was a fricking genius. There’d be jolly cloud-born tree boarding schools with magical oddballs who ride giant incandescent bumblebees in pursuit of the oblong desire of the wicked demon teeth who is holding Big Ears to ransom. Or something. With swearing. And cannibalism. Natch.

One Reply to “Chloe Yates”