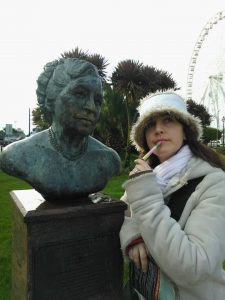 Geraldine was raised on a diet of Nancy Drew and pancakes, and her passion for creative writing blossomed. Travel fed her imagination, filling it with ideas and stories of dragons, water gods, epic battles and so much more. Her first published story was featured in ‘Tales of the Nun and Dragon’ from Fox Spirit Books, with a collection of short stories, ‘Weird Wild’, a YA novel ‘Akane: Last of the Orions’ also published. Her first preteen novella, ‘Ghoulsome Graveyard’ is published through Fennec Books, an imprint of Fox Spirit and for whom Geraldine is Commissioning Editor. Her short stories have featured in Siren’s Call and Fantasy Faction as well as the upcoming ‘My Wandering Uterus’.  Geraldine currently lives in the UK with a magic teapot, a sock-stealing pup, biscuit-stealing child and a very patient husband.

More about her crazy world can be found at www.geraldineclarkhellery.co.uk

I’ve been really lucky to live in a number of different countries so here goes: I loved in the Galapagos being able to walk down to the beach to swim with turtles, I found the mix of modern and ancient cultures in Japan fascinating (I’d have students with their latest gadgets stopping to make offerings to crumbling forest gods), I loved how passionate people got about food and wine in Spain and the general laid-back air of Australia. However, I’m fascinated by where I grew up because the changing seasons make it different every time I go home, but it’s still the same.

A princess! A bit of a cliche but my princess role models were She-Ra, Leia and Sarah from Labyrinth. I learned early that princesses need compassion, weapons knowledge, a love of reading and accessories.

Which super hero would you most like to be and why?

Notebook & pen, shampoo bar (just cos it’s the end of the world is no excuse not to look good!), walking boots and a good book (title of this changes frequently).

As for weapon, as an Apocalypse Girl, I’ve obviously thought about this a lot and think a sword might be good but could prove heavy and unwieldy (unless you’ve got a little one like Arya Stark’s ‘Needle’). Guns have too many parts which might jam and are useless when you’re out of bullets. Bows and arrows are pretty cool and making arrows during long dark nights when the zombies are roaming would be pretty relaxing.

I love Stephen King’s ‘Skeleton Crew’ which I’ve read so many times. Neil Gaimen’s work is always a treat, although (the horror) I prefer the movie of ‘Stardust’ to the book. However, if I’m too tired/attention deficit to read a proper book, I love the Hellboy comics.

Time and discipline. When I have one, I rarely have the other.

I’ve read a little of Marilyn Monroe’s poetry, essays and mish-mashed thoughts so I think it would be really interesting to see what would happen with a full length book, although I’m not sure she was a genre fan so I’d have to throw a few unicorns in during editing!