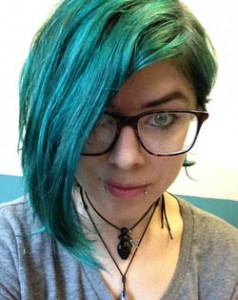 Ren’s a writer of weird things, not known for an ability to fit into boxes of any description. Published in various places, including anthologies by the fabulous FoxSpirit and Anachron presses, and THIS IS HOW YOU DIE, from Grand Central publishing. Represented by the fabulous Jennifer Udden of Donald Maass Literary Agency, Ren’s looking to invade book shops near you very soon. Find her on twitter @RenWarom, on Facebook /ren.warom and on the web at http://renwaromsumwelt.wordpress.com.

The battle of Maldon apparently raged on the causeway between the mainland and Northey island on the Blackwater, a place my friends and I used to spend many hours (many of them in absentia from school *coff*). I once almost had a chunk taken out of my leg by a Barracuda there. I only saw its eyes and teeth, its mouth was almost as long as my leg. The Blackwater was a wild, wonderful place (despite the odd sewage outlet). It was the *only* thing I loved about living in Maldon.

From when I was about junior school age till my early teens I wanted to be these things alternately, and occasionally all at once: a jet pilot, a racing driver, a jockey, an astronaut, an actress. Then it all boiled down to one thing: Alive. That last one became very pertinent for far too long a time. In many ways it still is.

Which superhero would you most like to be and why?

Black Widow. She’s awesome, way more physically capable than I could ever be, and smart as a whip.

My primary weapon is a CAS-Hanwei Tak-Wak (tactical Wakizashi). Four things I would definitely need in my bag are a fire-starting kit, oil/cloths/sharpener for my sword, a multi-function tool, and a first aid kit including an array of pills to combat anything easily treatable.

Duma Key by Stephen King. Every time. Hedges against the night, bitches. Build them.

Panic. No really. If I don’t panic about a story, about getting it right, I know I won’t finish it or be able to fix any problems it has. The stories I feel most passionate about engage with my panic in deeply intimate ways, forcing me to go and fix them no matter how horrifying the amount of fixing they need. The rest of my process is a big old mess of writing by the seat of my pants and getting bored of research after two seconds (yes, I know, I’m unnatural in that, I do not apologise).