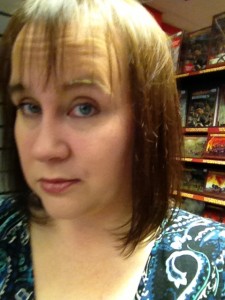 Sarah is a freelance author hailing originally from the South of England, but who, after not taking a left turn at Albuquerque, now finds herself in the North East. Her first sci-fi novel, ‘The Gildar Rift’ was published by the Black Library in December 2011 and her first fantasy novel ‘Valkia the Bloody’ in July 2012. She appeared in the first Fox Spirit ‘Tales of the Nun & Dragon’ with a story about a hero so inept that he makes the British Government look competent.

Sarah finds talking about herself in the third person incredibly hard to manage and so generally prefers to spend her ‘free’ time reading, watching films, playing computer games and playing her music ear-bleedingly in the car.

Tell us one thing you loved or found fascinating about a place you have lived.
I always find something to love about the places I live and I’ve moved around quite a bit in my years. I suppose one thing that stands out is just how pretty the Vale of Evesham actually was and the regrets I have at leaving it at all!

What did you want to be when you grew up (other than a writer if that was an option)?
I still haven’t grown up and I still haven’t worked out the answer to this question. I did go through the throes of ‘journalist’ (not nosy enough), ‘teacher’ (not clever enough), ‘actor’ (not confident enough), ‘special effects guru’ (the chance never came up), though if that helps.

Which super hero would you most like to be and why?
Pyro, from Magneto’s Brotherhood of Mutants. Because, dude. Fire. Or Nightcrawler for the *BAMF* potential.

It’s finally happened! The zompoc is here! Name four things in your ‘go bag’ and your primary weapon.
Things in my ‘go’ bag:-
1) Tin opener. You can bet your life that someone somewhere will have an impenetrable bunker with a stockpile of tinned foodstuffs and will have forgotten a tin opener. I would become a veritable *god*.

2) Toilet paper. For the same reason as above.

3) Photos of my family to remind me what I’m fighting for.

4) ‘Now That’s What I Call Zombie Fighting Music Volume 5’ for some fighting choons.

My primary weapon would ideally be a chainsaw. Because, chainsaws.

What is your go to comfort book or writer when you can’t settle into anything new?
For comfort, ‘bubble gum for the eyes’ reading, I love Marian Keyes. I adore her engaging characters and gentle humour. In genre, I will gravitate back to Weis and Hickman’s Dragonlance series over and over again.

What is the single most important thing to your writing process?
The background music. When I’m in a OMG SO SRS writing mood, it needs to be film soundtracks. Streaming Soundtracks is my writing friend.

If you could collaborate with any author who would it be and what would you write together?
Jim Butcher or James Barclay and it’d be some sweeping fantasy epic. With dry humour and general awesomeness thrown in for good measure.

Failing that, any collaboration on a Star Wars project would be like a dream come true!