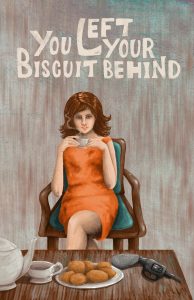 Feeding the fish takes a sinister turn, there are unusual happenings at Oasis News, there are mermaids in cape town and all is not well inside a simple bakery.
From noir to humour by way of fantasy and a touch of the creepy, this collection of stories explores crime through the lens of multiple genres.

Contents
Elf Prefix by Graham Wynd
Between Love and Hat by Jay Eales
Ghost Signals by James Bennett
No Mercy by K.D.Kinchen
That’s the Way the Cookie Crumbles by Penny Jones
Feeding the Fish by Carol Borden
Mermaids in Cape Town by Mame Diene
Patron by E.J. Davies
The Price of a Biscuit by Kate Coe
The Princess, The Pekingese and the Ivory Box by R.A. Kennedy

I was feeling pretty good for a Wednesday. My hangover from last night’s rot gut had become just a memory and one faint enough to make me look forward to the fights and some more gargle tonight. Then I got a visitor who needed my assistance. At least that’s what I could glean from Fleur’s babble. Whatever possessed me to hire that incomprehensible French woman as a receptionist, I just don’t know. It was probably the way she filed the papers in the bottom drawer. I was always finding reasons to update the folder on Enola Zachary.
‘What did he say? From where?’ I couldn’t make heads or tails of Fleur’s fluttery warblings, though she waved her manicured hands about as if sending signals. I sighed. ‘Just send him in.’
I don’t want to say the man looked like a librarian. I know some librarians. They are colourful, witty people who know an awful lot about an awful lot. Some have more tattoos than an Essex biker gang. But this man apparently was a librarian, too. ‘I am the chief librarian of a rather special collection,’ he sniffed, helping himself to a seat in front of my desk. Apparently he wasn’t in the habit of shaking hands with the hired help.
I looked him up and down. The word that sprang to mind was ‘fussy’ and that in spades. Maybe it was the fresh-from-the-press trousers with a crease that could slice bread. Or the silk cravat atop the blisteringly white silk shirt. Or the very expensive (yet startlingly small) Italian loafers. Or maybe it was the coal grey morning coat. Who wore a morning coat to work? ‘Special collection? Is this rare, vintage French ooh-la-la stuff? Not for public consumption except in special booths?’

3 Replies to “You left your biscuit behind”