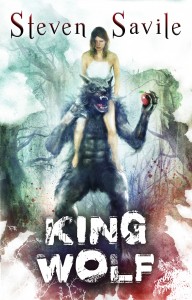 The death of a beloved children’s writer, Hoke Berglund, draws Jon Sieber into a world he cannot hope to understand – a world filled with Hoke’s creations, including the vile Mr. Self Affliction who is the cruel master of this place. In a landscape where angels are beautiful women and the by-blows of nightmares people the mythical Forgetting Wood, Jon, heir apparent to all that Hoke created, falls for Kristen, the writer’s daughter, but cannot let her secret remain secret.

“If there are secrets, as in the Grimm’s fairy tale nightmare of “The Fragrance of You,” there may well be good reasons that such things are hidden. In some cases, the wistful protagonist learns, you need to just take such gifts on faith; it isn’t necessary to understand everything around us. Some things we can just be grateful for, and enjoy as long as they last.” SF Site

Opening paragraphs of King Wolf
The Fragrance of You
The illustration was so much more than paper and ink. It was a farewell gift to a man he had loved without ever really knowing; a man whose few words in Princess Scapegoat, The Forgetting Wood and his last gift, Angel Home, had opened up a new world for so many children like him. Of course Jon wasn’t a child anymore but Hoke Berglund had written himself into his heart just the same. When he heard the old man had died it was as though a magic-shaped hole had opened itself in Jon Sieber’s life. The magic of childhood, innocence, wonder and the impossible, everything that was so wonderful about Hoke’s books, was suddenly gone. Snatched away. The crazy thing was they had never met. Not once.
Jon looked at the drawing again: the old man with his head down and his hands on the Life Stone, praying to the very heart of Angel Home, and to the angels all around him who knew it was too late for prayers.
It was raining. The branches of an old cypress offered little in the way of shelter. The handful of mourners had already begun to drift away, leaving a sad-faced women alone by the graveside. She held a white orchid in her hand.
She was so lost in her maze of thoughts she didn’t hear him approach.
Feeling self-conscious, Jon knelt by the grave and placed the drawing on the coffin lid. It looked pathetic lying there, a scrap of paper just waiting for the mud to fall but he thought the old man would understand. ‘Goodbye, Hoke.’ He whispered after a moment.
‘Did you know him?’
She had come over to stand beside him. As Jon stood their eyes met. She had been crying.
‘Not as well as I would have liked to.’

Tony Lane : There is a darkness that pervades these three stories. I thought that was going to be it though. A nice story wrapped in an allegory. Instead I found a story that seemed simple and easy to read but was much deeper and interesting than it first seemed. There was a lot of symbolism in this story aimed at differing levels to create maximum impact.