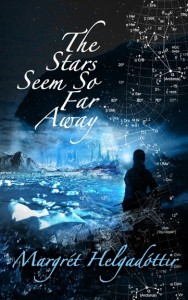 ‘Wars, famine and plagues rage across the dying Earth. Fleeing the deadly sun, humans migrate farther and farther north. The last shuttles to the space colonies, crammed to their limits, are long gone. The only plants and animals left are those that humans create in laboratories and artificial soil.
Guerrilla soldier Simik fights for independence for his forefathers’ land, once called the Green Land. On a remote island, Bjørg and her great white beasts guard a resource that could help ensure human survival. Sailor Nora plunders ships on the northern sea, while Zaki journeys to the promised land in the west. Amongst the legendary skyscrapers of plague-stricken Svalbard, Aida struggles to survive.
Five people in a future north. These are their tales.’

Margret Helgadottir’s kinetic prose immerses the reader in a future woven from the threads of Nordic history, studded with jewels pillaged from our mythic past.’
– Damien Walter, Columnist for The Guardian
Finely observed, beautifully written; Margret Helgadottir’s stories have the chill brightness of new myth. She is a writer to watch.
– Adam Roberts

Opening Paragraphs of The Stars Seem so Far Away
Nora stood on deck waiting for the other ship to come closer. The sails flapped over her head, eager to let the wind take hold. The air was thick with ocean mist. She held her ship steady, never letting the other craft out of her sight.
An old wooden sailing ship, heavy in the sea, it glided towards her, majestic and elegant despite the high waves. The wind strained the massive sails to their limits. People ran to and fro on the deck, adjusting them. She counted five. All men. Shivering, she huddled deeper into her fur coat.
They had not fired at her yet, but she could see the weapons hanging from their shoulders and backs. They furled some of the sails and came up alongside her ship, hooks ready, and connected the two ships. Only a few inches of foaming sea separated them. The men were young. Two had let their whiskers grow out, probably in an attempt to appear more manly, but the few tufts only highlighted their youth. A giggle escaped her lips. She bit her tongue. No one stayed young for long at sea.
The men talked with each other, gesticulating towards her, her ship, her sails, and her pile of furs up front. The roaring wind drowned their voices, but the few words she heard made her stomach sink. They were pirates. Vultures. Thieves and murderers. Hunger, greed and something she didn’t want to investigate further shone in their eyes.
One of the men fingered a large tooth hanging from a chain around his neck. He moved towards her. Nora eyed the knotted scar that slashed across his forehead.
‘Hello my lady. I am Rolf. These are my men, Morten, Hans, Lars and Jon.’

Reviews
Margret has collected all the reviews here but we have highlighted some below.
E.P. Beaumont : The narrative compels through spare suggestion — short story on the boundary with poetry — and implies a world of vast sweep in its pauses. The Stars Seem So Far Awayis set in a post-apocalyptic Far North, where much of the middle latitudes of Earth have become uninhabitable and streams of refugees have found their way to cities built where currently nothing lies but tundra.
Books Abound on Goodreads : For me, there was a very distinct essence to the prose that I loved. It wasn’t too flowery and seemed to reflect the state of their world. Beautifully nuanced in all the right ways.
The Future Fire : I wish the book had been twice its length, the better to explore this world and its people, but in its brevity it manages to become something like a fable for the future, promising rewards for good deeds.

2 Replies to “The Stars Seem So Far Away”