Nicoletto Giganti is one of the most celebrated Italian fencing masters of the 17th century. His widely-acclaimed treatise of 1606 promised a second work, which however was long considered lost or never to have been written.

Nonetheless in 1847 Alberto Marchionni did describe a purported second book by Giganti, outlining its contents in reasonable detail.

In 2012 Joshua Pendragon (as Guest Exhibition Curator for the Noble Art of the Sword exhibition at the Wallace Collection in London) and Piermarco Terminiello, determined that the 1608 edition of Giganti held in the Lord Howard De Walden Library, is none other than the volume promised by Giganti in 1606, and described by Marchionni.

This is the only known extant copy, of a work whose very existence had long been considered no more than a rumour. A book sought after and anticipated for centuries.

This find is significant for scholars and enthusiasts of Historical European Martial Arts (HEMA) worldwide, and for Fox Spirit the treasure hunt of its rediscovery is equally compelling. We are very proud and excited, after centuries of obscurity, to present you with the ‘lost’ work of a great Italian master, fully illustrated, in complete English translation. 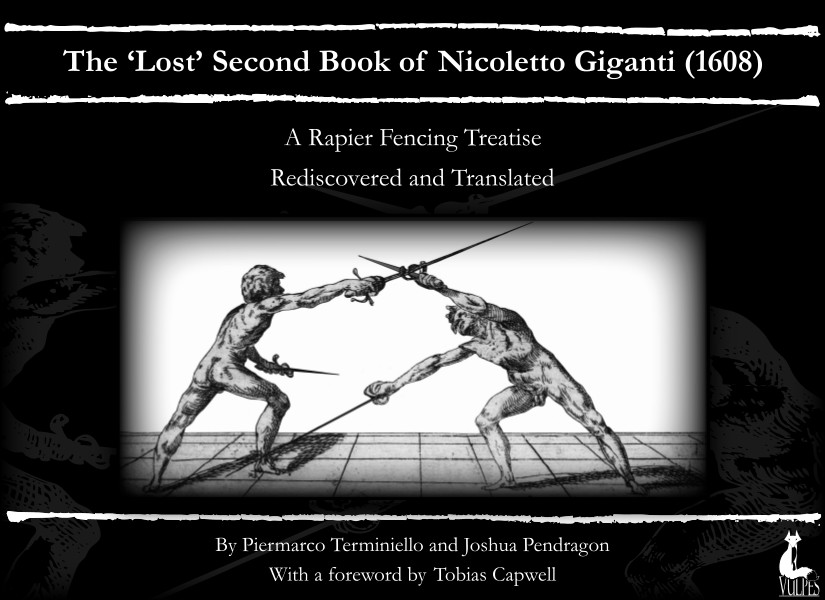 The entirety of Giganti’s treatise is a wonderful masterwork of the art of fencing. Giganti’s ready, clear and complete intuition; the fantastic simplicity of his actions and the spontaneity of the various movements; the refined artistic feel which reveals itself in every detail of the extraordinary work, are qualities that place Giganti in the most elect rank of writers on arms.  – Jacopo Gelli (1890)

It must be said that for the quality of its writing, Giganti’s is one of the very few classical works of fencing to have been held in regard by men of letters . . . the treatise is without a shadow of a doubt one of the best of the first half of the seventeenth century. – Carlo Bascetta (1978)

In this, my first book on fencing, I propose to discuss only two types of arms: the sword alone and the sword and dagger. I will leave all manner of other weapons for future books, which God willing, I will bring out as soon as possible. – Nicoletto Giganti (1606)

… we should not make promises [we can’t keep] to the curious … Nicoletto Giganti promised to publish a second book, but it cannot be found. – Giuseppe Morsicato Pallavicini (1673)

In 1608, from the press of Giovanni Fontani of Pisa, came forth a second book of fencing by Niccoletto Giganti in which he deals with the use of the single sword, sword and dagger and also the sword and rotella, the sword and targa, the sword and buckler, the sword and cape, the dagger alone, the dagger against the spear and the dagger alone against the sword. Subsequently he discusses grabs to the weapon and pommel strikes to the face, and of other grapples advising to put your left hand over the hilt of your opponent’s sword. He proposes executing the passata sotto in the tempo in which your opponent performs a cavazione on the line of terza. Finally he discusses a new guard with the sword and dagger with the left foot forward, suggesting that he proposes to publish another book where he will teach all of the actions possible with the left foot forward. This treatise is illustrated with 53 figures, very badly drawn and likewise engraved; nevertheless his treatise is filled with very useful teachings. – Alberto Marchionni (1847)

… according to Gelli, Giganti did fulfill his promise to write a subsequent book on single sword and sword with a variety of companion weapons … To my knowledge, this work has not yet resurfaced. – Tom Leoni (2010)

The discovery of an apparently unique extant copy of Giganti’s legendary second book is certainly a remarkable achievement … The release of a body of work from a great Renaissance master, thought lost (or never to have existed) for hundreds of years, is very exciting indeed, and a major new contribution to the modern effort to rediscover the lost arts of defence. – Tobias Capwell (2013)

We suspected the 1608 edition in the Howard de Walden Library might be Giganti’s rumoured second work, and not a simple reprint of his 1606 treatise. But we had to check to be certain.

Holding it for the first time, I can only describe the feeling as being overcome with awe. In my hands was a book which until then I wasn’t sure had ever even existed. Without realising, I gripped the pages so tightly I risked tearing them, and afterwards I was still quivering in exhilaration.

But having flicked through the plates, and recognised that they precisely matched the description given by Marchionni, we knew that Giganti had indeed kept his word, and that this ‘lost’ second book had finally been unearthed.

The Howard de Walden Library was lost to the public sphere for decades in a barn in Berkshire until an amazing series of events led to its reemergence in the 1990s. That amongst this unearthed treasure trove is found this lost gem compounds the improbability of such a find to the nigh impossible. This is akin to finding a lost Spanish galleon in which lie the arms of the Venus de Milo. That Giganti’s work  happens to be a good read too is also nice.

5 Replies to “The Second Giganti”