Love hurts…but that’s the way she likes it.

‘A fantastic tale of friendship and deceit, interspersed with sex, drink, cards, a loveless marriage, dodgy dealings, but mainly sex as Peter’s obsession and addiction to his best friend’s girl leads him down a dangerous path.’

‘Extricate blends forbidden passion and noir so seamlessly, it’s remarkable. Wynd has a very strong voice, and the prose just floats you through the story. I’m always looking for great stories that come from great writing, and Graham Wynd is someone I’m going to look out for in the future.’

Opening Paragraphs of Extricate
‘Just one kiss.’
‘Just one?’ She paused on the steps, latchkey in hand and turned those big brown eyes on him.
He tipped his hat back, trying to look like it wasn’t much important and he didn’t have a stake in her saying yes or no. ‘I think it’s only fair to get a taste of what my best mate has stolen out from under my nose while I wasn’t looking.’
She smiled. Her teeth gleamed unnaturally white in the dark. The distant rumble of traffic from the motorway provided the only soundtrack to their goodnight on the rundown entry.
That and the hammering in his heart.
‘Stolen,’ she said with a playful air. ‘How could I be stolen you’re already spoken for. You got nothing to kick at about his luck. If that’s what it is.’
He moved up to the next step, closer. Her warmth beckoned to him in the night’s chill. There would be rain later. She had said she slept better with the rain, earlier but after Dud had left.
‘You see my girl gets safe home,’ his best pal had said as he rose to go. ‘The boss needs me just now. I may be late,’ he told Judy as he leaned down to give her a perfunctory kiss on the cheek.
And all he could think was what a waste of a lush pair of lips.
They drew all his attention now. Still parted from her smile, red rouge smudged by the drinks they’d had, the cigarettes she’d sucked eagerly and stubbed out, they none the less looked ripe and ready for a bite and he was damned if he would give up this lucky chance to push his luck and see if he could just get a little taste of what he wasn’t even supposed to touch. 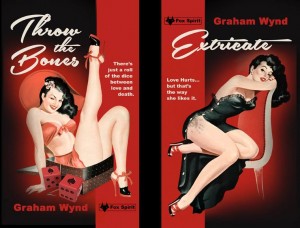 Paperback edition includes two novellas ‘Extricate’ and ‘Throw the Bones’ as well as a dozen ‘Brief Capers’ in a glorious wraparound cover.