Got Ghosts by Fiona Glass
Cover art by Vincent Holland-Keen 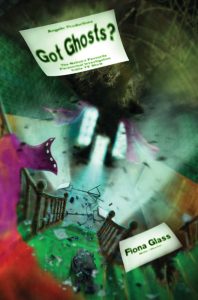 Haunted manor house Greystones Hall is filled to the brim with ghosts.  It’s also falling to bits, and artist owner Emily doesn’t have the money to refurbish the place. When the makers of hit tv show ‘Got Ghosts?’ offer to pay for a weekend’s filming there she jumps at the chance, even though she and her ghostly grandfather Gramps have reservations.

The reservations seem to be misplaced when the film crew swing into action, and producer Carl turns out to be dark, handsome and very available.  But Emily soon starts to have doubts about the methods they use, which Carl won’t discuss. Then the show’s resident medium Stella stirs up a new and malevolent spirit, revealing a dark secret at the heart of the house that has been hidden for centuries.  And when Emily’s own safety is threatened, together with that of her ghosts and her beloved Gramps, will it be Carl who comes to the rescue, or someone much more unexpected?

Opening Paragraphs of Got Ghosts

Emily was in the library dusting endless stacks of books when the phone rang. It was one of her least favourite chores so she wasn’t too unhappy about the interruption. She stifled a sneeze and picked up the receiver. ‘Hello?’
‘Miss Price? This is Angelica from Angelic Productions, the makers of the hit tv show ‘Got Ghosts?’. I don’t know if you’ve heard of us?’
‘Um, I think so,’ Emily said, balancing the feather duster on the edge of a shelf and perching her buttocks on the desk.
‘Oh good,’ said the voice, which was female, deep, and thoroughly in control. ‘In that case I don’t need to explain. Shall I say we’ll see you on the twenty-seventh?’
‘Erm, yes. I mean no,’ said Emily, trying to collect her scattered thoughts. She’d just been day-dreaming about Johnny Depp and the transition to ghosts was not a happy one. ‘Look, what d’you mean, see me?’
The voice gained an edge of impatience. ‘I mean we’ll be coming out to film on the twenty-seventh.’
‘Oh, right. Er, film what, precisely?’
‘I see I shall have to explain after all. Miss Price, the ‘Got Ghosts?’ crew spends the weekend at a haunted property and films the results. The programme goes out on the Paranormal Channel at nine pm Mondays and Thursdays and our ratings are very good.’ The impatience was turning to the hurt of an abandoned dog and Emily, kind-hearted to a fault, hurried to appease.
‘Oh yes, I’m sure they are.’
‘We have it on the very best authority,’ the voice continued as though it hadn’t even heard, ‘that your property, Greystones Hall, is one of the most haunted houses in England. Isn’t that right, Miss Price?’
‘Er, well, I suppose….’ said Emily, chewing a finger nail.
‘Splendid. We’d like to come and film your ghosts on the weekend of the twenty-seventh to the twenty-ninth. If that’s all right with you.’