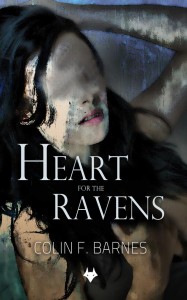 This novella was originally envisaged as a short story for Tales of Eve, but the idea had so much potential for a novella that we decided to remove the word limit and publish it separately rather than force it to be squished up into unsatisfying brevity.

A love of science meets a burning desire for life.

In the traditions of Poe and Shelley, Heart for the Ravens is a
gothic horror story set in the 19th century following a heroine in search of a man with a good heart.

Katerina Roeslling is the daughter of a wealthy businessman and resents being treated as just another asset by her father. When she meets Willhelm, a rough-hewn, but charismatic, soldier, she thinks he is the right man for her, but he is just the start of a tragic nightmare.

Katerina has to fight her demons of guilt and grief and face her true fate at her family’s Whitby summer home ‘Ravendale.’

It is there she’ll discover what she is capable of and what continues to haunt her from the shadows.