The Elkie Bernstein novels by Jo Thomas explore what happens when a normal teen is suddenly targeted by weres. In 25 Ways Elkie just needs to survive, but once she has managed that things get really complicated! 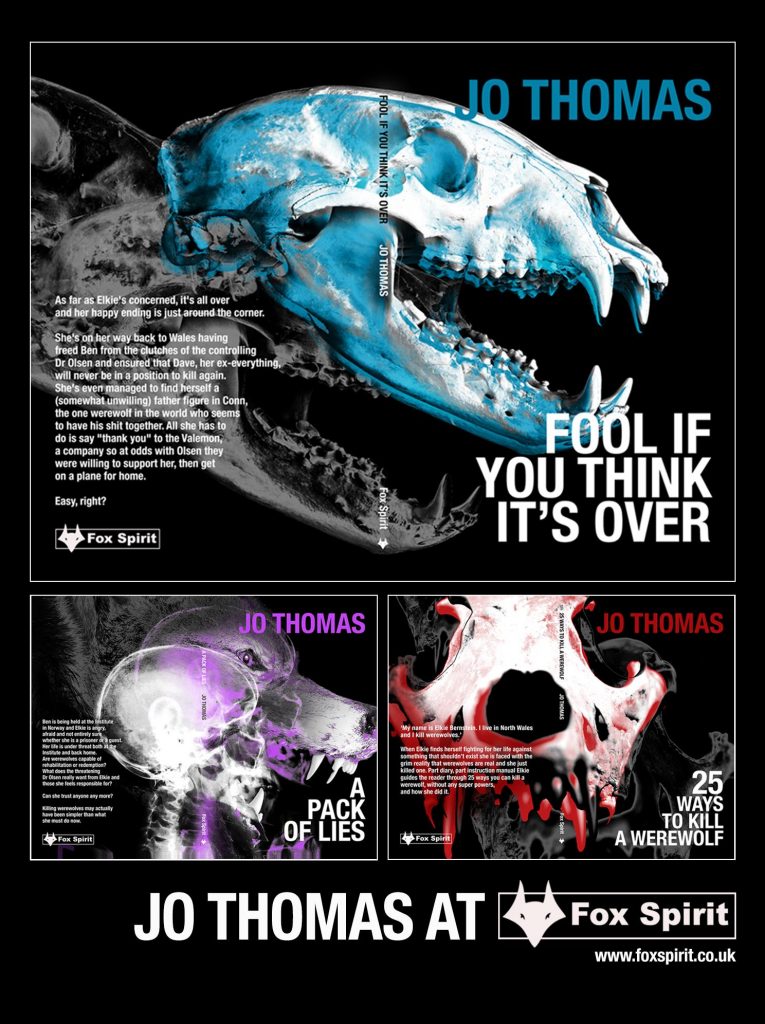 ‘My name is Elkie Bernstein. I live in North Wales and I kill werewolves.’

When Elkie finds herself fighting for her life against something that shouldn’t exist she is faced with the grim reality that werewolves are real and she just killed one. Part diary, part instruction manual Elkie guides the reader through 25 ways you can kill a werewolf, without any super powers, and how she did it.

A Pack of Lies by Jo Thomas
Cover by Sarah Anne Langton
Things are going sideways at Dr. Olsen’s Institute in Norway, a home for wayward werewolves in all but name. Ben is being held for playing dangerous games, Dave is being held for not playing well with others, and Elkie is not entirely sure whether she’s there as a prisoner or a guest. Angry and afraid, she struggles to cope now the games are over. But are werewolves really capable of rehabilitation or redemption? What does Olsen really want from Elkie and those she feels responsible for? Can she trust anyone any more?
Life was simpler when it was just about killing werewolves.

Fool if you Think it’s Over by Jo Thomas
Cover by Sarah Anne Langton
As far as Elkie’s concerned, it’s all over and her happy ending is just around the corner. She’s on her way back to Wales having freed Ben from the clutches of the controlling Dr Olsen and ensured that Dave, her ex-everything, will never be in a position to kill again. She’s even managed to find herself a (somewhat unwilling) father figure in Conn, the one werewolf in the world who seems to have his shit together. All she has to do is say “thank you” to the Valemon, a company so at odds with Olsen they were willing to support her, then get on a plane for home. Easy, right?

Opening paragraphs of 25 Ways to Kill a Werewolf
Method 1: A Stake Through The Heart
I found out that werewolves exist when I was still fifteen, just about a week before my sixteenth birthday in fact. It was too young to cope with what happened but I don’t suppose anyone is ever ready for werewolves.
So. The first day.
I woke from a dream I don’t remember but it probably involved local golden boy, Ben Lloyd — at that time, they usually did — as my hormones gave me my wake-up call. Yeah, it will have involved masturbation. I’m only human.
I got up, showered, dressed and grabbed a piece of toast on the way out the door. I ate my toast as I sat on the garden wall and waited for Dave. I counted weeds on the lane and wondered whether the potholes were bigger than the same time last year.
‘Bore da,’ I said when Dave arrived.
‘Bugger off,’ he said back, ‘Mornings’re never good.’
In those days, Dave was just the boy next door and next door was the farm at the end of the mile long lane. The decrepit ex-labourer’s cottage my mother rented belonged to that equally decrepit farm, my mum not being able to afford anything better and Dave’s parents not being able to afford to fix up either place. Asset rich, capital poor, what with sharing the meagre profit from a small Welsh hill farm among ten cousins.
‘Meet in the copse, tonight?’ Dave asked.
Before you get the wrong idea, neither of us was sure about this puberty thing or ready for the pairing up the kids at school were doing. Sure, we had our fantasies but who doesn’t?
Buy 25 Ways to Kill a Werewolf
Buy A Pack of Lies

Kate Laity : Fun, engaging and open-ended enough that we could have further adventures of Elkie, but we don’t have to rely on them to feel satisfied. Just curious

8 Replies to “The Elkie Bernstein Novels”