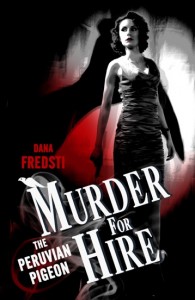 Murder for Hire : The Peruvian Pigeon
by Dana Fredsti

‘Connie Garrett knows that a trenchcoat and a fedora don’t make a detective. She’s the co-founder of Murder for Hire, an acting troupe that specializes in spoofing, not sleuthing. When MFH performs at a sleepy coastal community’s mystery gala, celebrating the works of a famous hard-boiled mystery writer, the bodies start stacking up, and Connie finds herself on the case whether she likes it or not. Now Connie is committed to solving the murders while trying to keep both the show-and her love life-afloat.’

Cozy noir, ‘The Peruvian Pigeon’ was Dana’s first novel and is an entertaining tale of theatre, murder and writing. Fox Spirit is delighted to have re released it.

Opening Paragraphs of Murder for Hire: The Peruvian Pigeon

‘Hand it over, Club! We know you got it.’ Scarface Tony’s face twisted into a snarl as he pointed his ’45 at Carl Club. ‘Hold out
on us and you’ll be leaking tomato sauce all over your nice, shiny floor.’
‘Yeah,’ grunted the other gorilla, towering over Club in a stance meant to intimidate.
‘I don’t know what you punks are talking about.’
Unintimidated, Club stared coolly at the two thugs. ‘C’mon Club,’ Scarface barked. ‘We want the goods! You know, the loot, the dough, the clams, the hot ice, the moola, the do-re-mi!’
Club looked at them contemptuously. ‘I don’t got what you scum are looking for. And I ain’t no stoolie. And you can tell that
to your sauerkraut sucking, Nazi boss.’
‘Take him, Tiny!’ Scarface shouted as the big gorilla lunged, catching Club in a choke hold. ‘You had your chance, Club. Now you’ll be dripping arterial ketchup all over your office… ‘
‘Oof!’
The seamy world of Carl Club evaporated back into our living room as Brad, aka ‘Carl Club’ took a real punch to the gut from Chris ‘Scarface’ Galante. Everyone immediately broke character as Brad doubled over. Chris stood to one side, looking sheepish.