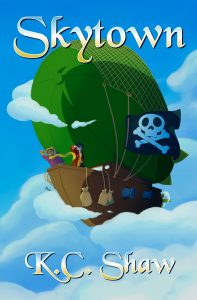 Skytown is a fantasy adventure of airships and piracy, and the first full length outing for Lizzy and Jo, characters that have appeared in a number of K.C. Shaw’s short stories.

Four months ago, Jo Clarke and her friend Lizzy McGowan stole an airship in Amprad and flew off to see the world. Now they’re out of money. But when they down a blimp to rob it, they get much more than they bargained for. Someone has already shot the passengers. Only one wounded young man survives and he’s not talking – except to lie. All Jo and Lizzy salvage are some coded paper that hint about a powerful weapon – a weapon sought after by the emperor of Ampra, the king of Hule and the notorious air pirate Keez. If Jo and Lizzy turn the weapon over to Amprad or Hule, they’ll be pardoned for air piracy. They’ll also start a war. The only way to avoid war is to join up with the cold-hearted Captain Keez – and steal the very weapon everyone wants.