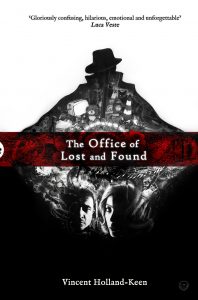 Opening Paragraphs of The Office of Lost and Found

HE WOKE UP from nothing into a dark room with a single window. A cat figurine sat on the floor next to where he lay.

He stared at the ornament, waiting for his memory to explain the situation, but his memory was gone.

He knew a world existed beyond these walls and he knew it was full of people and places and facts and figures and he knew he must have lived a life there, but the details were lost to him.

He became very afraid. He curled tightly into a ball and closed his eyes and prayed that if he waited long enough, maybe at least his name would come back to him.

A breeze touched his face, followed by a faint scratching at his nose.

He opened his eyes. A piece of paper fluttered weakly on the floor before him. A message was written upon it in thick black ink:

‘Your name is Thomas Locke. You work for me now.’

He looked up and around, both hopeful and fearful that the author was here. That was when he saw the shadow within the shadow for the first time.