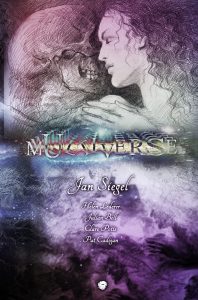 Multiverse by Jan Siegel and Friends

‘Poetry is when an emotion has found its thought and the thought has found words.’  Robert Frost.

‘Genuine poetry can communicate before it is understood.’  T. S. Eliot.

Multiverse brings together the poetry of Science Fiction/Fantasy writer Jan Siegel and five other contributors, also best known in other spheres.  The poems cover love and death, feminism and eco-issues – legends and libraries, chemo and cake, pirates and paranoia and Paris.  They aim to amuse and enchant you, but above all – like the magical forgotten story in Voyage of the Dawn Treader – they are there for the refreshment of the spirit.

Upon a Dark and Stormy Night by Jan Siegel

It was a dark and stormy night
As oft in days of yore,
A night so black no eye could track
The print of werewolf’s paw;
The rain in waves washed o’er the graves
And strafed the forest floor;
The lonely kirk crouched in the murk –
The wind shook at the door.

The Traveller walked the woods alone
Fearing nor wolf nor wight,
With leaking boot and dripping snoot
He strode on through the night;
Clouds hid the moon (yes, it was June) –
The clearing came in sight –
Where tombstones lurch around the church
He glimpsed a phantom light.

A greenish, pale-ish, flaysome gleam
That flickered, shrank, suspired,
As if a phone there lurked alone,
Its batt’ry near expired,
And called the dead from wormy bed
To haunt the rain-swept gloom –
He thought he saw a spectral claw
Come groping from a tomb.

He strode up to the oaken door
And knocked in manner bold,
While up his spine there crept a line
Of shivers – he was cold –
The phantom gleam approached and seemed
To watch him like an eye;
That baleful gaze yet could not faze
The man who stood nearby.

He beat upon the door again
As Lear beat on his breast;
He wiped his nose upon his clothes
With manners not the best;
And as he beat he heard the feet
Come dragging on the floor,
The handle creaked, the timbers squeaked
A hand drew back the door.

‘It wasn’t locked,’ the priest declared,
‘For locks cannot deny
The graveyard ghosts that come in hosts
To haunt me by and by.’
‘You’ve hit the Scotch.’ ‘Ah, on this watch
There’s little else to do.
We’d both be damned without a dram –
Now try my Mountain Dew.’

And so they sat beneath the cross
Sampling a whisky rare
And still ignored the shadow-horde
That gathered round to stare,
The phantom leer from sockets drear,
The empty mouths that gaped,
As from those bones as dry as stones
The dreadful groans escaped.

The spectral light popped through the door
And hovered in the aisle.
Within the pews their ghostly trews
Had long gone out of style.
‘The grave is dry,’ the phantoms sighed,
‘And death is deadly dull.
Come, fill the cup!’ They handed up
Some body’s empty skull.

The priest he filled it to the brim –
They passed the skull around;
He saw the spasm of ectoplasm
Which all but shook the ground,
For twelve-year malt’s a lightning bolt
To liven up the dead
And every ghost there drank a toast:
‘Life after death!’ they said.

All through the night the men caroused
Among the cheerful shades,
The baneful light grew warm and bright
And o’er the forest glades
The full moon grinned despite the wind
And wiped its yellow face
Upon a shroud of passing cloud
The rainstorm to erase.

They drained the whisky bottle dry,
They started on a new –
And when the lark chased off the dark
The phantoms formed a queue
And vapour-faint in day’s constraint
They tottered to their bed
And each one pullt his grassy quilt
Above his aching head.

The graveyard sleeps under the sun,
The men sleep in the kirk
And maybe, in an hour or three,
They’ll stagger back to work…
But when again there blows the rain
Some dark and stormy night
They’ll party with the hearty dead
Until the morning light.