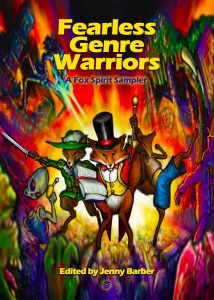 A sampler anthology drawn from the full back catalogue of anthologies and collections published by Fox Spirit from our opening gambit in 2012 to October 2018.

The Dragon’s Maw by Cheryl Morgan
Palakainen by K. A. Laity
The Band of Straw and Silver by Andrew Reid
From the Womb of the Land, Our Bones Entwined by AJ Fitzwater
The Itch of Iron, the Pull of the Moon by Carol Borden
Tits Up in Wonderland by C. A. Yates
Fragrance of You by Steven Savile
Kumiho by V.C. Linde
The Ballad of Gilrain by Sarah Cawkwell
The Ballad of Gilrain lyrics by Sarah Cawkwell
Art is War by Alasdair Stuart
The Alternative La Belle Dame Sans Merci by Jan Siegal
Thandiwe’s Tokoloshe by Nick Wood
Unravel by Ren Warom
The Cillini by Tracy Fahey
Katabasis by K T Davies
Train Tracks by W. P. Johnson
Sharkadelic by Ian Whates
Feeding the Fish by Carol Borden
Antichristine by James Bennett
Lucille by Alec McQuay
Carlos by K. A. Laity
A Very Modern Monster by Aliya Whiteley
Winter in the Vivarium by Tim Major
Always a Dancer by Steve Lockley
The End of the World by Margrét Helgadóttir
The Holy Hour by C. A. Yates
In the Mouth of the Beast by Li Huijia
Kokuri’s Palace  by Yukimi Ogawa
A Change of Heart A Babylon Steel story by Gaie Sebold
Indiana Jones and the Pyramid of Envy by Alasdair Stuart