Skip to content
What The A-Team Taught Me
When I first watched the A-Team I remember thinking that for a unit of soldiers they were all really bad shots. Watching ten years later I had a better understanding of what suppressive fire was. In basic terms it means to proving covering fire to aid the movement of troops. The added bonus being that it is significantly harder to stand up and shoot straight with incoming fire whizzing above your noggin. Last year I watched some episodes again and realized that the firing of weapons by The A-Team was usually a distraction as well as covering fire. It made me think of that old adage about true strength being in not using your strength. I’m pretty sure that any member of the team could have wasted every single criminal in their path whilst they were sleeping if they wanted to. That for me was always one of the central parts of the story. They were accused of theft and murder but when they acted as mercenaries for hire they asked for little or no financial recompense or glory. Must importantly though they did not kill the criminals and took great pains to avoid seriously injuring them. 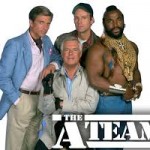 It was a violent show. People got hurt, but NOBODY got killed unless it was important to the plot. Think back to all those car crashes. There was always a shot of somebody crawling out of the car. When somebody was shot they were only winged by a through-and-through. Everybody pulped by B.A Baracus either got up or was shown later in cuffs.
Cabbage cannons! How freaking cool! OK, I’ll calm down now. There was something fundamentally appealing about the way The A-Team were able to turn a pile of old junk in to a tank with a bizarre but effective weapon. I may have strapped the odd water pistol and stick to my bike after watching an episode. I still would if I was allowed.
I can’t really talk about The A-Team without mentioning Hannibal. The leader and perennial smartest man in the building always gave off the impression that he was intellectually bored and seeking a challenge. I loved the way he took great delight in using disguises and other methods of subterfuge to undermine the bad guys. It was like he was playing chess several games ahead. It showed that you didn’t have to be as physically imposing as B.A. Baracus or mad like Murdock to be effective at taking nasty people down a peg or two. 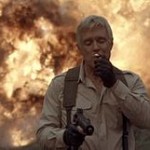 More than anything the thing I got most out of this show was a pretext to play soldiers in the woods  with other kids. We didn’t need to know each other as we could just play a role from The A-Team.
This website uses cookies to improve your experience. We'll assume you're ok with this, but you can opt-out if you wish.Accept Reject Read More
Privacy & Cookies Policy