THE ENCLAVE by Anne Charnock

In this novella, Anne Charnock returns to the near future United Kingdom of her first novel, A CALCULATED LIFE (which was a finalist for the Philip K Dick Award). In that novel genetic engineering was aiding the establishment of an elite, with access to upgrades for intelligence, antisocial behaviour etc. whilst the majority are denied these and form a struggling underclass. Whilst A CALCULATED LIFE looked mainly at the privileged through the eyes of a naïve “simulant” Jayna, this novella looks in more detail at the general population, living on minimal support and surviving on a mixture of wits and intimidation. 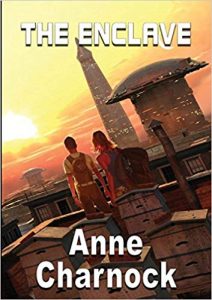 The story is told mainly from the viewpoint of two characters who live in an “enclave” outside the city, where like a shanty town most of the available jobs are menial or dirty, and people are constantly scrabbling to make a living. These two characters are Caleb, a bright and enterprising twelve-year old refugee and Ma Lexie, a young widow who is barely tolerated by her husband’s gang family and surviving by using young children without parents as child labour to recycle thrown-away clothes and scraps to eke out a living. Caleb was “recruited” by a scout for the gangs from a travelling refugee group after he lost his mother and he now works in Ma Lexie’s group. When Caleb manages to catch Ma Lexie’s attention with his designs for improving clothes, she promotes him and this allows him a little more freedom to plot an escape. Both characters are simultaneously victims and manipulators. Ma Lexie may control the children’s lives but she is in turn controlled by the gang who at any time could take away her “business”. She promotes Caleb for her own advantage but also in a desire for company and someone to look after her. This is a society where everyone uses everyone.

In a short 59 pages, Anne Charnock constructs a very believable world which could easily be extrapolated from current events. This is an excellent example of “show not tell” – it touches on many serious issues whilst still keeping the story paramount and is more effective for leaving the reader to think and draw their own parallels. The characterisation is superb – one is both sympathetic and repulsed by the actions of the characters. The prose is first-rate – precise and sharply accurate, building up a wealth of detail via small observations. It is not a work where the technology is at the forefront, or with a large amount of “action” (although events do happen and there is a very definite plot). and thus, may not suit fans of more traditional SF. However, in my opinion, Anne Charnock in this novella has shown yet again that she can write extremely intelligent and thought-provoking SF.