I had a whole draft of this column which was basically the opening monologue from the grumpiest episode of Last Week Tonight. I talked about just how fucking unbearable of a horror show the last couple of weeks have been for, well, pretty much everybody. I had stuff in there about how US politics is so morally bankrupt they can unperson a hate crime against the LGBT community because selling more guns is more important than saving more lives. I had a whole bit about the collection of feral and rabid children’s TV mascots who are dominating UK politics right now. I described one particularly odious one as ‘Darkest timeline Mr Toad.’ If you know which one I mean, that’s pretty funny. If you don’t, please, seriously, keep it that way. He doesn’t deserve to live in any more people’s heads and you can use the space for something better.

I touched on just how horrific it is to have a British politician murdered for the first time in almost three decades. I talked about just how great an actor Anton Yelchin was and how inconceivably, brutally unfair it is for anyone to die as young as Jo Cox, Yelchin or any of this year’s stream of victims to date.  I talked about how the referendum I’m voting in on Thursday is something no one wants but, because UK politics really is The Thick of It with horror instead of jokes, we have to do it anyway. I talked about how tired, and angry and, at times, how frightened I am of this stuff.

You won’t be reading that column.

It’s taken three days for me to get the distance I needed to realize something. I wasn’t witing it for publication, I was writing it to get it out of my head. To exert a little control in a year which, at the halfway point, feels like that bit in Charlie and the Chocolate Factory where shit starts to get very, very real indeed. It helped me. Reading it back, the only thing it would do for you is add to the foothills of Mount WhiteDude Thinkpiece.

So, instead, let’s talk about joy.

Things are rough right now and things are so generically rough, everywhere that people across the planet will probably read that sentence and go ‘Damn right.’ When things are this bad there are two ways to deal with it, I’ve found, that work.

First off, manage your strength. This week in particular, social media is going to be a dumpster fire. A lot of people are going to want to engage with issues a lot of the time. Sometimes you’ll be one of them. Have at. But, when you can, step away. Time and again, over the catastrophe parade of the last few years, I’ve seen people obsessively parked on social media watching stories develop.

Sometimes that holds you up.

Sometimes it puts you down.

Learn to step away, learn to choose when to engage. Be prepared for that answer to be ‘never’ if you need it to be. But please, at the very least stretch and hydrate once an hour.

Secondly, find some fun. One of the greatest philosophers of the 20th century once said we want fun. And Doctor WK was right, we do. In fact we don’t just want it we need and deserve it. So, please, if you can, enjoy yourself. Want to know the best way I found to do that this week?

Voltron: Legendary Defender on Netflix is SO much fun. Classic Voltron premise; alien battleships shaped like lions that turn into a colossal robot, tetchy crew, space princess, comedy space mice, guy with a big mustache. The whole thing is designed to be accessible for people who’ve never seen any form of the show before and boy does it pay off. The animation, from the Legend of Korra team, is amazing. The voice work, especially Bex Taylor-Klaus as Pidge, is great and the show has a wonderful energy and spark to it. It’s smart and kind and goofy and fun and THERE IS A COLOSSAL ROBOT MADE OUT OF LION SPACESHIPS. Seriously, if you’ve got Netflix, go watch it, it’s great.

Amazon Prime more your speed? Watch The Duff. Mae Whitman is going to win Oscars later in her career. She’s an endlessly gifted and completely open comedic actress with dramatic chops to back it up. Whitman is the lynch pin of a smart, witty comedy that takes the usual teen drama tropes and turns them on their heads. Massively funny, emotionally nuanced and Robbie Ammell takes his shirt off. What more could you want? Aside from Lion Spaceships?

Neither of the above? Go pick up Speed. The greatest action movie of the 1990s. Actually two of the greatest action movies of the 1990s and the third act which is a bit bobbins. Regardless, Keanu Reeves’ hyper intense, and not super bright, SWAT officer remains one of his greatest roles, Sandra Bullock is fantastic and there’s an uncredited Joss Whedon script polish. Which, trust me, you’ll notice. Also, play spot the Richard Schifff cameo! It’s not where you think! 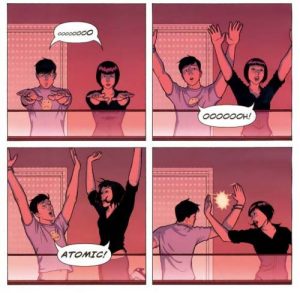 Not a movie person? Phonogram by Gillen, McKelvie and others is one of the definitive comics of the last three decades. Music as magic and magic as music in the post Britpop years. And if you’ve read the series then you know three things:

2.It has taken Herculean levels of self control to not write an entire thing about the issue that panel is from and how much fizzing effervescent joy it brings me.

3.Simply putting that here made me smile

D.Yes, you’re right. You DO need to read it again. 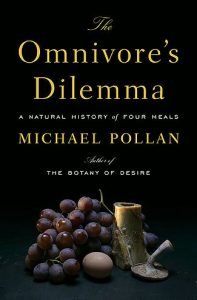 Not a comic person? The Omnivore’s Dilemma by Michael Pollan. One of the greatest food writers of our time talks about the surreal, Orwellian lunacy of the US food system. And also how to make really good chicken. Also there are jokes.

Music rather than books?

Beethoven. All of it.

Not a classical fan? The Stones.

Watch something. Read something. Listen to something. Play something. COOK something. This year has been full of horrors, it is only halfway done and it’s all too easy to put your back to the fire and watch the tree line for whatever’s next. I know, I’ve lived in that state of mind. I won’t say you shouldn’t do the same.  I will say you don’t have to do it all the time.

It’s okay to be frightened. It’s okay to be angry. It’s pretty mandatory to be exhausted. But it’s absolutely vital you are not just those things. We all deserve to be more than okay and right now, it seems like very few of us are even that. So please, this month, if you can? Stand down. Recharge. Have some fun. And remember; Lion spaceships