Some of my earliest formative memories are of cult TV. Particularly from the year 1981. I remember being terrified of the Watcher in “Logopolis” and seeing Tom Baker transform into Peter Davison. I also distinctly remember the ending of the final episode of Blakes 7, simply entitled “Blake”.

I was four years old and my father was a sci-fi fan and watched the show regularly. I was too young to fully understand what was going on but I knew that by the end the heroes of the show were being killed one by one. It is well remembered as one of the most shocking ends to a show in the history of television and with good reason.

Many years later, as a teenager, I began to collect episodes of the show on VHS. The episodes I chose to buy were from the first three series. The memory of that final episode was still with me and I didn’t feel ready to watch it again.

In my early thirties I obtained the whole series and started to make my way through it. It was as good as I had always remembered. Sure, there were some shortcomings in the special effects and some of the costume designs and acting choices were quite out there, but it was more than made up for with some sparkling dialogue and some great characterisation which made you question both the methods and motivations of the main characters who are ostensibly our heroes.

Blake leads a rebellion against a totalitarian regime, the Federation, but as the series goes on it becomes clear that being righteous isn’t the same as being right. Blake’s war against the Federation is fuelled by obsession and ego. Blake doesn’t just want to destroy the Federation he wants to be seen to be the one destroying it. This arrogance leads him to push forward with actions that are ill advised. The goal is more important to him than how it is achieved. His actions lead to the deaths of allies and members of his crew. His initial reaction to his first major defeat is to sulk on an uninhabited planet and lick his wounds. 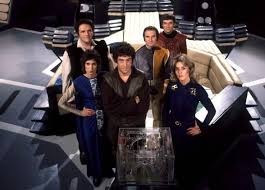 When he finally gets into a position to strike a potentially fatal blow to the Federation, he finds that he can’t do it because of a greater threat preparing to invade their galaxy. Instead of destroying the Federation he finds he has to not only warn them but fight alongside them against their mutual enemy.

The crew of the Liberator never fully recovers from this defeat. Blake disappears and Avon, Blake’s most vehement detractor amongst the crew, finds himself in command of the ship. While this is something that he has wanted since he got on board, Avon finds that being in charge isn’t everything he thought it would be and develops obsessions of his own.

The first of these obsessions is avenging the death of his lover, whom he believes the Federation killed when he was arrested for large scale embezzlement. This truth of what happened shakes him and he becomes obsessed with a new goal: finding Blake.

This obsession will lead to the destruction of the Liberator, the death of one of his crew and the rest of them being marooned. Even when they find salvation and a new base of operations Avon has become totally obsessed with fighting Blake’s fight and finding the man himself. When, in that final episode, they finally meet both men are so changed by what they have gone through as to almost not recognise each other. Blake’s poor decisions along with Avon’s paranoia lead to everyone getting killed and the Federation winning.

What does all of this have to do with my memories of first seeing “Blake”? Well, I didn’t know it then but I was being taught an important lesson. As a child we are told stories with happy endings. Happy endings make us feel safe and comforted. They give us hope that good people are rewarded and bad people are punished. Blakes 7 was always more complex, watching it again for the first time since I was four, there is a feeling of doom about the episode but also an inevitable culmination of events. Avon has been on the back foot the whole series suffering defeat after defeat. Avon smiles as he is about to be killed because deep down he has always known that this was how it was going to end. He knew as early as “Cygnus Alpha”, the third episode of series A. In that episode he tells Jenna that they should take the Liberator and abandon Blake:

“We have to. He’s a crusader, he’ll look at all this as just another weapon to use against the Federation and he can’t win. You know he can’t win. Which do you want to be? Rich or dead?”

Jenna elects to be loyal to Blake, but Avon’s prediction about their fate hangs over everything they do and ultimately he is proven right. When it happens it feels like the only way it could have ended. They were a handful of people with conflicting goals attempting to stand up to the might of a massive empire. It was never going to end well for them and it doesn’t.