Whatever Lola wants, Lola gets — faboo artist S. L. Johnson tells us how she came up with her latest eye-catching design for the cover of Drag Noir:

When I was asked to create a cover for the “Drag Noir” antho, it was quite a challenge. “Drag” is a full-on gender-bending costumed performance role, meant to be seen and heard, while “noir” is dark and nefarious, and hidden. Resolving these two ideas in visual form led to a lot of dead-end ideas, and my desire to represent both male & female gender conventions in drag further muddied the creative waters. After several false starts, I decided I would take one face and split it down the middle, with the idea of that the face could be seen as the woman or the man in drag. I felt this was the obvious solution, but in such a graphic, flat form, it would work well. It’s shadowy, a la noir, but with bright red half-lips, and a green face that represents the very made-up faces of drag queens, yet could also be corpse-like in the pulpiest way.

It works, for sure!

Be sure to check out Johnson’s other work which runs the gamut from book and CD covers to posters and more! Including her other noir covers for us.

Having just released the marvelous White Rabbit by K.A Laity and the first Young Adult novel, the excellent ‘Warrior Stone : Underland’ By R.B  Harkess we are not slowing down. Next up we have the two volumes of ‘The Girl at the End of the World’, ‘Missing Monarchs’, the part prose part poetry novella ‘The Velocity of Constant’ and what we are calling ‘the summer of the wolf’, because we have two werewolf novels coming up. ‘Heart of Fire’ by J.Damask and 25 Ways to Kill a Werewolf’ by Jo Thomas.

We’ve already show you the other covers, so here is Jo’s wraparound to keep you on the edge of your seat. 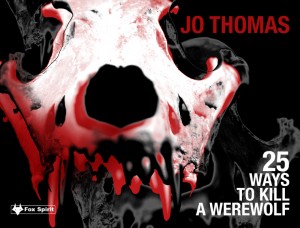 Sign up to our newsletter for more information and a free sampler of forthcoming poetry chapbook ‘And the Fox Crows’ by V.C. Linde

It’s none stop in the Fox Den to bring you fantastic fiction.