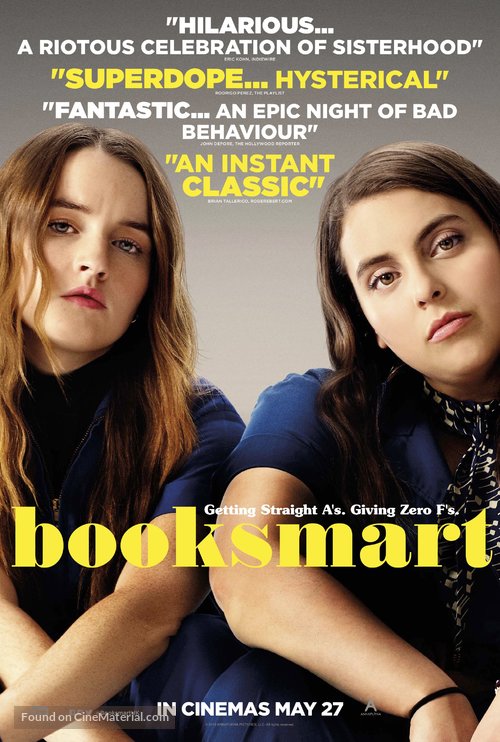 So I’ve checked outside and it’s all still on fire. That’s the bad news. The good news is that it’s so egregiously and completely on fire that everyone can see it. The countryside is burninated. The peasants are burninated. The thatched roof cottages are going DOWN. It’s just a fact at this point.

That means, like I say, everyone can see it and if everyone can see it that means you don’t have to see it all the time. The single upside to culture-wide multi-quadrant fucktastrophe is ubiquity of observation. You’re not going to miss anything, or miss an opportunity to do some good, by stepping away for a few hours. Or as Mike Doughty puts it….

First off, and miraculously still playing in theatres, Booksmart. Directed by Olivia WIlde (13 from House) from a script by Emily Halpern, Sarah Haskins, Susanna Fogekl and Katie Silberman. it stars Kaitlyn Dever and Beanie Feldstein as Amy and Molly. Amy is recently out, kind of terrified and a straight A student. Molly is class president, a Supreme Court justice in waiting and absolutely prepared to take down anyone or anything that stands in her or her friend’s way. They are brilliant, hard working, relentless and have never partied once. They had more important stuff to do. Until, on the last day of school, Molly discovers the kids who partied got into the same universities they did and makes a solemn vow; they’re going to have fun. By any means necessary. Cue the music.

What follows is this beautifully balanced tango between abject teenage mania and painfully well observed characters. There’s a moment where Amy correctly guesses why Molly is acting a certain way towards another character that will break your heart with its honesty. Likewise, Amy’s catastrophic first kiss is romantic until it turns hilarious until it turns horrifically embarrassing. The movie features the single best written and acted argument I’ve seen this century, as the girls go from light-heartedly messing with each other to absolutely cutting loose. The frantic nature of late stage adolescence is hard coded into every single frame and it’s at times a hard watch but always for the best reasons.

It’s also relentlessly funny. From the opening dance off to the magnificent final few seconds Booksmart is never well behaved, always goes for the best, smartest joke and always surprises you. It’s also littered with excellent cameos, the best of which by far is Billie Lourd as possibly supernatural, definitely massively high partygoer Gigi. Hilariously angry, completely driven and painfully sweet, Booksmart is a modern classic. Miss it at the theatres? Track it down on digital August 20th and blu-ray in early September.. It’s more than worth it.

Which brings us nicely to Chef. Written, directed by and starring Jon Favreau it follows chef Carl Casper through the worst, and also best, night of his life. Carl works at a high end Californian restaurant and on the night a big critic comes in, he’s told to ‘play the hits’ rather than experiment. He does. It goes badly. He freaks out. It goes badlier (a word). He freaks out again and he’s fired. Until, with the aid of his ex-wife’s ex-husband, he buys a food truck and rediscovers the simple joy of cooking and of being a father.

On paper it looks sappy as hell but Favreau is a man who never met a piece of dialogue he didn’t love, or a scene he couldn’t frame. From opening to closing, Chef is a love letter to food and what food it is. With technical assistance from Chef Roy Choi (Whose Kogi food truck I have eaten from and remains one of the best meals I have ever had in my life), the techniques and recipes all work. But even more importantly, so does the culture. Carl works constantly, intoxicated and obsessed by food and Favreau, who trained with Choi, shows us everything. The rambunctious, cheerfully foul nature of every kitchen. The strict hierarchies, fierce loyalties and cut throat ambition. All of it stacks up and, brilliantly, evaporates once the truck gets on the road. It may be cramped but you can see Carl breathe out, see Favreau’s burly shoulders droop as his guy rediscovers his love for the game. Given Favreau made Chef after several massive blockbusters, it’s impossible not to draw comparisons between Carl and his creator too.

But the movie really soars in the gentle way it explores Carl’s burgeoning friendship with his ten year old son, Percy. Emjay Anthony is fantastic as a calm, focused kid who wants more and has no problem telling his dad where to get off and he Favreau have great chemistry. The movie also takes the brave step of casting Carl not so much as a bad guy as not a very a good one. He knows he’s a bad father and husband and while he tries to do something about it, there’s always the work, always the food. He and John Leguizamo as best friend Martin are born to that world. Inez, his ex-wife played by Sofia Vergara and girlfriend Molly played by Scarlett Johannsson are far less lucky. Molly in particular exists solely to gaze adoringly at Carl while he makes her lunch and then tell him to go find his bliss.

That element is a hard ask but get past it and Chef is the very best comfort food. Favreau is a great leading man, funny and naturalistic. There’s a wide variety of fun cameos including several familiar Marvel faces. The food looks amazing, the creativity behind it is inspiring and the movie does a lot that’s smart, subtle and kind. Also do eat before seeing it. Or take notes while you are. Chef is available to buy now and honestly, get it. If a really great grilled cheese sandwich (And this movie features the best grilled cheese sandwich in cinema history) was a movie, it would be Chef.

So there you go, a little cinematic comfort food for these trying times. Dig in, trust me it’s worth it.