Weird Noir was one of our early titles, edited by K.A. Laity and it was so much fun we managed to persuade her back to do two more, Noir Carnival and Drag Noir. The idea was simply to throw another genre or trope that interested us in the mix with noir stylings and it resulted in some incredible stories and really superb anthologies. 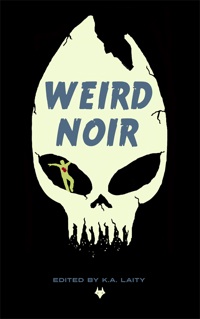 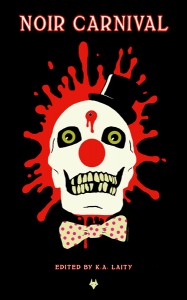 We all went a little crazy at the Noir Carnival launch at Edge.Lit 2013

and finally we closed off by taking a look at gender and sexuality in Drag Noir. K.A. Laity swears she won’t do any more, but we’ve heard that before. 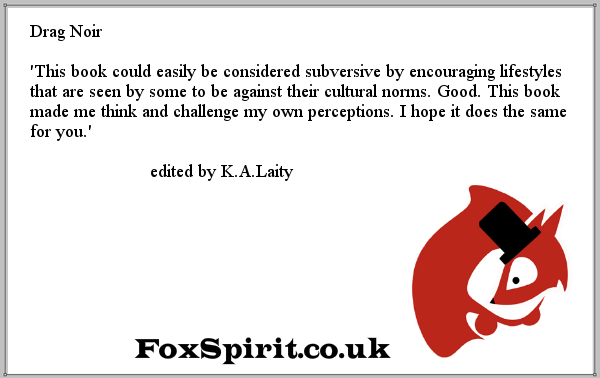 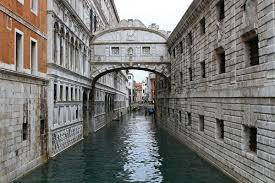 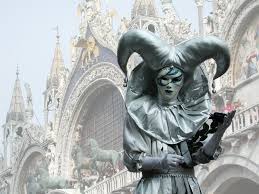 that I’m starting to make things up in my head. Why did it
have to happen? I think for the millionth time, tears pricking
at the corner of my eyes. I hurry back to my cold apartment,
where I dig into my coat pocket to find the keys. My fingers
rub against a scrap of paper and I pull it out. The paper
is thick and brown, the letters gilded: Invite to the Feast of
Fools. There’s no address. It’ll be some stupid street act, I
think, stuffing the paper back into my pocket and drawing
out the keys.
I sleep badly, disturbed by strange sounds. Someone outside
must be having a party. The noises seem to seep into the
room. They slide about the walls, scuttling into my ears and
around my brain.
I wake feeling fuzzy and dry-mouthed – the hint of a
hangover – and with a nagging thought: what if there was
something more to that grey figure? What if she was trying
to tell me something… about Stella? Come on, Tom, I scold
myself. She was just some crazy peddler.

From ‘Carne Levate’ by Emma Teichman

This is also up at awesome editor Kate Laity’s site

We are also planning on bringing Weird Noir cover artist S.L.Johnson back on for this project.

A call for stories from Fox Spirit Books, publishers of Weird Noir and many more superb volumes.

Carnival: whether you picture it as a traveling fair in the back roads of America or the hedonistic nights of the pre-Lenten festival where masks hide faces while the skin glories in its revelation, it’s about spectacle, artificiality and the things we hide behind the greasepaint or the tent flap. Lead us on a journey into that heart of blackened darkness and show us what’s behind the glitz.

Touchstones (to give you a sense of the breadth of the net cast):

Surprise me, delight me, make me afraid of the shadows of a warm summer night, rip my guts out and stuff them back in again. Just don’t bore me. All editors have their tastes or quirks: if you want a clue to my sensibilities, check out my extensive bibliography and of course, read Weird Noir.

We will ask for world-wide print & ebook rights for a year and pay $10 via Paypal as an advance against the royalties to be split with the publisher. We plan to launch the book at EDGE-Lit in Derby in July 2013.