Well the Foxes had a busy weekend.

Saturday we got up bright and early and headed to Nottingham in the light rain and chilly air for Other Worlds. A one day event run by the ever excellent Alex Davis and Nottingham Writers Studio. I pretty much spent the day downstairs, being on and watching panels. 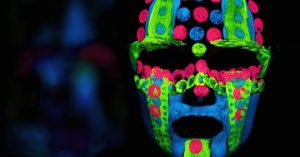 Among the guests were Gav Thorpe, J.R. Park, Alison Moore, Justina Robson, Stephen Aryan and Charlotte Bond. A stellar line up I was delighted to be part of. I moderated a discussion on short stories. As a huge fan of the short it was lovely to get writers takes on their role in the industry. I also sat on the Tropes panel which had some lively discussion around the role of tropes, for better and for worse. The other panels of the day were superb, with intelligent and varied contributions from writers who clearly really engaged with the subjects. Gav realised last minute that he was moderating but ran the panel brilliantly. I would later come to regret teasing him.

I wore fox ears. Of course. 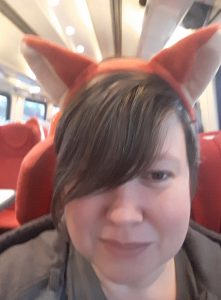 Mr Fox and I then pootled off to get the train to Sheffield. After a very relaxed night at a premier inn which included pizza in bed and sleep, we were just about refreshed and ready for the final day of Sci Fi in the City. The book programme is run by Sam Stone and David Howe and they always put together an excellent and busy selection of treats for the event.

I started with a one on one interview with Sam, which was up against cosplay so we had a small audience allowing for a very relaxed conversation with some input from others. I might have been a bit over excited about the colouring story book Zena the Zombie and tried to persuade Sam custom crayons were the way to go.

After a break, during which pop up puppets did their hilarious version of Jaws (do see them if you get the chance), I moderated a panel on self publishing which looked pretty openly at the pros and cons, and why you might choose to self pub and the practicalities. Followed this up with what was originally posted as a small press discussion but ended up being ‘Aunty Fox and Ian Whates have a damned good catch up and chat about the stuff that goes on’. We covered a lot of the joys and hard truths of small press and while it felt very indulgent to spend a whole hour talking to the lovely Ian in this way the audience seemed happy to just occasionally provide a topic. A rare opportunity for those who attended to hear how it really is.

Finally the afternoon wrapped for us with a writing SF & Fantasy Panel. I had to eat my words from teasing Mr Thorpe because I realised 5 mins before my 3 hour stint started that I was down to moderate this. I obviously stole some of the questions from the tropes panel, and honestly with the guests I had very little moderating was needed, it was more like throw something out and let them run with it. An absolute joy. I met some utterly delightful people, caught up with old friends including several skulk members and found some even bigger fluffier ears. We came home with lots more books and a whole load of others on my list to try. A fantastic weekend. My guests over the course over the day included Sam, Ian, Bryony Pearce and Rob Harkess among others. 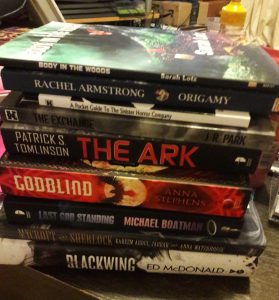 I now have a couple of weeks for my voice to recover before Fantasycon at Chester, where I am pleased to say I am just a punter this year. If you are there I will be the one in giant fluffy ears.

Just one final shout out for the weekender, to these fabulous cosplayers who went back for the cat. 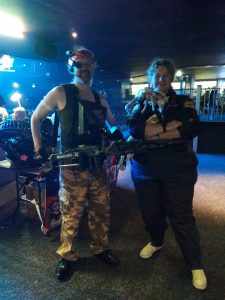