Going into the World

As I grew up, Cult TV provided a precious escape from suburbia. Being trapped in a cul de sac in a small, dull town was somehow more bearable when I could imagine Fox Mulder and Sam Beckett out there having adventures. The more escapist, the better.

Initially, that’s what drew me to Star Trek. The outside world never seemed bigger than when I was watching Kirk, Spock, and McCoy in the 23rd century, overthrowing evil computers and having their three-headed debates about human nature. Their Technicolor sets were often little more than cardboard, but they still hinted at an intergalactic grandeur that inspired me. But I didn’t travel for myself, at least not at first. That didn’t happen until I discovered Doctor Who. 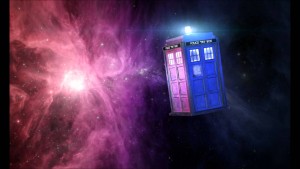 I was one of many who came onboard after the 2005 relaunch and began devouring every episode, new and old, that I could find. Doctor Who‘s scope of adventure seemed even larger, as I watched those lucky companions travel through both space and time, but it was also somehow more grounded. It was easier to picture myself as part of the action. It was no longer simply watching someone else experience a new place, it was practically an invitation to have my own adventures. It was an invitation I couldn’t refuse.

So I went out into the world. I visited the Torchwood tower in Cardiff and attended a Star Trek exhibition outside of Berlin. I took blind trips, stepping off of a bus in a strange country with no idea what language they spoke, what sort of money they used, to better feel like I’d just beamed down or stepped out of the TARDIS. As great as it was, I began to realize I’d overlooked the underlying point of these programs.

Star Trek was never really about exploring the stars. Doctor Who isn’t about running from Daleks. They’re both about exploring humanity, discovering our strengths and our flaws, and how to be our very best. They promote acceptance and celebrate diversity. That shiny veneer of the future I’ve been drawn to is these shows’ inherent optimism, the belief we could get over what plagues us now.

Cult TV has inspired me to try new things, go to new places, and consider new ideas. It shows us that the future can be a better place, and encourages us to be better people as well.