A review of Mycophilia: Revelations from the Weird World of Mushrooms, by Eugenia Bone.

As dusk settled over the woods, I spotted the thing through a break in the trees, where the underbrush was thinnest. Imagine, if you will, a floppy-frilly brain, about the same size and shape as head of cauliflower, squatting on the top of a rotten log, an eerie ghostly white against the gloomy damp.

I crept closer, utterly perplexed. I’d never seen anything so alien. I took a photo, and once my hike was finished and I’d returned home, I sent the picture to a neighbor, who also happens to be a botanist, and asked her what it might be.

Instantly, I received a text.
‘Where?’
I told her the trail and location of the rotten log.
‘Tell no one,’ she urged. ‘Must get it immediately.’

What clandestine monster had I stumbled across? The brain, she informed me the next day, was a sparassis, a difficult-to-find delicacy that, once washed of bugs and boiled, has the texture of egg noodles and a mild flavor. After my message, she’d immediately donned her boots and raingear, grabbed a flashlight, and headed out into the misty night to find the rotten log, harvest the beast, and devour it with butter. The reason for her excitement was made clear when she explained, that same rotten log will sprout more sparassis next year, and they are not easy to find in the wild. As for the precise location, she’s swore me to secrecy. 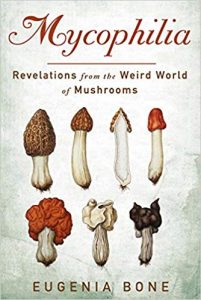 There’s a certain type of madness that is mycophilia, the fiery passion for fungi that overwhelms all rational thought, that sends neighboring botanists into the black woods in the middle of the night with a only a jackknife and a canvas sack. Soon after sharing the discovery of the sparassis, I received a gift: a copy of Eugenia Bone’s book, Mycophilia: Revelations from the Weird World of Mushrooms.

The book appears at first glance to be a compendium of fungi, but instead, it perfectly captures the characters and personalities of mushroom-lovers, and is more of a journey through this strange, bizarre, and multifaceted community than a simple field guide. Bone, an internationally-acclaimed journalist and food writer, divulges a slew of facts, figures, and trivia about mushrooms as we follow her on her voyage into the fascinating subculture of fungi enthusiasts — from scientists and mushroom hunters to truffle aficionados and medicinal researchers. It’s an engaging book, not only for widening your appreciation of the mushrooms on your pizza, but also displaying the hidden passions that lurk in people’s hearts. You may have a mycophile in your life, and not even know it.

Bone’s writing style is casual, relaxed, with just a hint of bewilderment, and you can sense her own mycophilia growing as, chapter by chapter, she follows hunters into the wilderness, explores mushroom farms, and meets with mycologists around the world. Can it be a coincidence that, since writing this book, she has become the president of the New York Mycological Society? I sincerely doubt it.

Mycophilia: Revelations from the Weird World of Mushrooms has doubtlessly sparked new generations of mycophiles to sprout in dark corners, and it certainly altered how I look at mushrooms, whether they’re on the forest floor or in the produce section of the grocery store. The book provides an eye-opening introduction to both fungi and human behavior, unearthing gems in both realms. I may have given up a cherished location to a prized and delicious fungus, but I received a book that revealed a whole new world in return, and that’s fine with me.