Futurefire.net Publishing and the Institute of Classical Studies are currently working on a mixed fiction and nonfiction anthology titled Making Monsters, with a focus on classical monsters in fantasy, horror or science fiction short stories. They currently have a call for fiction submissions out with deadline February 28th.

The book will be published in the middle of 2018, and edited by Emma Bridges and Djibril al-Ayad. Our monster editor Margrét Helgadóttir will have an essay in the book about the world’s monsters, based on her experiences with editing the Fox Spirit Books of Monsters. To celebrate the monsters and the coming Making Monsters book, she interviewed Emma Bridges about the background for the book and monsters. 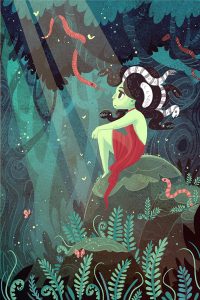 In October 2017 we held a public event entitled “Why do we need monsters?” at the Institute of Classical Studies in London, where I am based. At the event four academics who have researched different aspects of monsters shared some of their work. It was attended by a mix of people who were interested in contemporary monster culture (for example in films, novels and art) and those with an interest in the ancient world. There were some great questions from the audience and it also generated a lot of interest on Twitter, with people sharing their favourite monster images and so on via the hashtag #ICSMonsters. Certain themes kept recurring in the discussions we were having – conversations around monsters and gender, or monsters and disability, for example. The idea for Making Monsters came from that – it’s a great way of continuing those conversations and combining creative responses to monsters (poems and short stories) with essays written by those (including some of the speakers at the original event) who have an academic interest in the theme.

I’m really keen to find ways in which the work which goes on in universities can be shared with the wider public – this kind of “public engagement” is a key part of my role here at the Institute of Classical Studies, which is a centre for supporting, facilitating and disseminating academic research in classical subjects. I’m hoping that the book reaches those who might be curious about either classical myth or monsters more generally, or who enjoy reading speculative fiction, but who haven’t necessarily read anything academic about any of those things. The fiction/poetry and essays by academics will complement each other well as they will draw together some recent research on the topic with new imaginings of classical monsters produced by creative writers. Along with many other classical scholars I’m particularly interested in the contemporary reception of classical myth – the ways in which ancient texts, themes and ideas have been reinvented in new artistic and cultural contexts by writers, artists and other creative practitioners – and it’s also exciting to think that the call for poems and stories will result in the creation of a series of brand new pieces of creative writing focusing on these characters.

I think that monsters are often physical incarnations of humans’ deepest fears – they are imagined creatures, often with exaggerated characteristics (like having huge fangs or multiple heads), or whose bodies are hybrid forms combining the physical features of several different creatures. There’s often a sensory element to the way in which we envisage monsters too – they might be imagined as making terrifying noises, for example, or as being unpleasant to touch.

Rather than having one favourite monster, I have favourite versions of particular monsters. So at the moment I’ve been thinking a lot about Steven Sherrill’s Minotaur in his novel The Minotaur Takes a Cigarette Break, which takes the Minotaur out of the classical world and relocates him as an awkward, lonely and misunderstood character in contemporary America. It’s a really interesting exercise in what happens when we take a different perspective on a character who was traditionally seen as straightforwardly terrifying – Sherrill helps us to get inside the mind of the Minotaur as a character whose difference from the “norm” makes it hard for him to fit in. In a similar vein I really like the artist Howard Hardiman’s rendering of the Minotaur too – his is a melancholy figure for whom it’s hard not to feel sympathy, and on looking at that image I find myself imagining how terrible it must have been to be confined to a labyrinth, away from contact with the outside world except for the delivery of a consignment of humans for his next meal. For sheer gruesomeness in visual art, though, it has to be Rubens’ Medusa for me – she’s pretty terrifying!

Since ancient times, it seems that humans have always imagined monsters in their stories and art – so, for example, in Homer’s epic Odyssey we find characters like the many-headed Scylla, who terrorises sailors by snatching them from their ships and devouring them, or the one-eyed man-eating Cyclops who is cast by the poet as representing the very antithesis of civilised society. I think that monsters like these have a role to play both in showing the extent of the human imagination and also in illustrating the things that people have always found frightening – often that’s about the fear of the unknown (such as the anxiety associated with undertaking a voyage across unfamiliar seas, as in the case of the Scylla), or about the subversion of what is perceived as the “correct” type of behaviour in any given society (as in the case of the Cyclops).

I think that the continuing appeal of stories and films about, for example, werewolves or vampires, shows that the fascination with supernatural creatures who have the power to inspire terror has never really gone away! Where contemporary receptions of classical mythology are concerned, to me one of the most interesting things is the way in which old stories and characters are continually being revisited and adapted in new contexts. Any new version of a mythical story can influenced by, for example, the artist or writer’s own interests or personal beliefs and experiences, as well as by the contemporary political, social or creative context within which it is produced.

I’ve spent a lot of time talking to practitioners for the journal Practitioners’ Voices in Classical Reception Studies and I’ve learned that the motivations for adapting myths in a particular way are as varied as the artists and writers who reinvent them. Looking at these new versions and talking to the people who produce them also helps me and others to understand more deeply some of the ancient texts which I study. By definition myth is fluid, not fixed – there is no one “correct” version of a story – and just as the ancient Greeks and Romans reinvented their own stories in new contexts and using different genres or artistic media, so that remaking of the stories still goes on now.

Thanks for joining us, Emma! Best of luck with the book!

Robin Kaplan, also known as The Gorgonist, has given permission to use her image “The Lonely Gorgon” as cover art for the book. 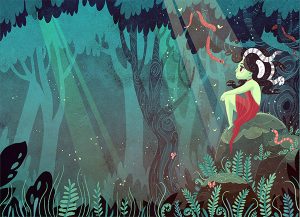