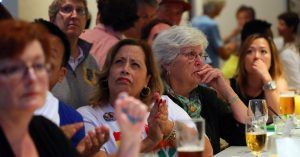 The expression of – bemusement – on these women’s faces is understandable, given they’re listening to a US Presidential candidate explain how grabbing any woman’s crotch is a perk of the powerful, celebrity male. Somehow, they assumed that a contender for presidency, despite being an “oleaginous pre-ejaculate that somehow gained sentience” in the carefully-crafted assessment of @ChuckWendig, wouldn’t come out with this load of Cro-Magnon bollocks.

On the other hand, bemusement was my first response to my last experience of overt sexual entitlement. Bizarrely, it happened ten years’ ago; I wasn’t young then or in any way naive, although I was new to the high end of commercial media. I sat in the first meeting with a top creative and his partner to discuss a multi-media project at which I was passed as physically attractive enough – for writing and brainstorming concepts. What?. Then the top creative escorted me back into Piccadilly Circus underground where, in the spirit of getting to know me, he snogged me chastely. This was in public and he was/is not Donald Trump. I decided to ask him if he snogged his male business partner and if not, why me; apart from that, it was the end of getting to know each other. However, he continued to offer advice on my appearance and public persona.

Age doesn’t get rid of issues about our self-worth or our bodies; I’d got rid of most of mine but if I had been younger, it’s worth putting the warning out there that you don’t have to do anything you’d rather not do in order to get recognition or publication. And your body is OK. I know I haven’t seen it but trust me, it is. The first time someone makes a comment on your hair, eyes, placement of nostrils, can you pull your hair over more … a bit more, for the promotional piccies, just say:

This is the body the words live in. Sorry.

You won’t find billionaire narcissist bigots who grab at your crotch in publishing because because there’s not enough money in our industry. But there will be people with the power to make things happen for you who are less emotionally intelligent, more thin-skinned, less resilient to criticism, who have trouble with their gender balance. Elena Ferrante knows what happens when you are dependent on someone for whom a woman is a threat just by virtue of being a woman.

Most of the bullying is mental and emotional. Take a leaf from Hillary Clinton in the 2nd Debate, when Trump circled her, a looming, sniffing, newly-sentient pigbucket, apologies to pigs everywhere, stand your ground, ignore them, keep cool, remember your tactics, say what you need to say, share what you wanted to say with trusted confidants afterwards.