I am not a fan of the term YA as I feel it creates an artificial separation and removes many excellent novels from the attention of “adult” readers. Indeed, many fondly remembered SF books from earlier years such as Andre Norton or much Robert Heinlein, would now probably be classified as YA. Janet’s novels to me have that same appeal to a very wide readership – indeed my son was fighting me to read this book first when he saw I had it which is not something he does with most of my reading material (Jim Butcher and Ben Aaronovitch being the other notable exceptions). 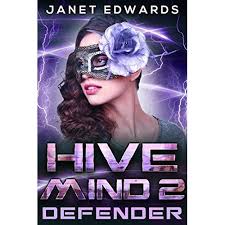 In the first book, TELEPATH we saw Amber as she turns eighteen and enters the Lottery, the psychological testing that determines the future role and rank of every citizen based on their aptitudes and society’s needs. However, Amber is found to be a very rare and valuable telepath. Telepath’s are vital in detecting criminals and preventing crimes in the vast closed community of the Hive in which she lives. So valuable is this ability that unlike other citizens she will not be imprinted with relevant information (and attitudes) and she must be protected and her abilities kept secret from all but a handful of people.

In the first book we saw Amber getting to know her team who both protect her and help her hunt. She had to come to terms with incidents from her childhood and adapt to her new circumstances. In this second book, set only a few months later, Amber is now working effectively with her team in identifying potential criminals and preventing incidents. However, finding a dead body of someone they knew without Amber having detected any warning signs of a crime precipitates a crisis. Someone with close knowledge of telepaths and how their teams work is clearly involved. As they try to uncover the traitor and their plans for massive destruction and disruption, Amber must also struggle within her mind as opening her thoughts to others brings its own threats to her sanity and identity.

As with other books by this author, DEFENDER combines well a strong plot and narrative with interesting and fallible characters. The story is well paced and the reader wants to keep reading to see what happens next. Amber in particular is extremely likeable and shows development and growth as she deals with both professional and personal crises. As well as the plot strands of the traitor and Amber’s psychological health, there is clearly a larger arc plot developing around Hive Societies and the complexities of being a telepath as Amber starts to learn and importantly question her new circumstances. YA or crossover it may be but there is a lot of story and depth in these books while still appealing to that market. The author is not afraid to move to different characters and settings than her previous series and the world of the Hives is interesting and very different from that of the Earth Girl series. The style and SF settings remind me very much of Anne McCaffrey’s non-Pern series (eg The Talent, Crystal Singer and The Ship Who … series) and anyone who enjoyed those will find much to like here. Another thoroughly enjoyable SF novel that will appeal to many.