Foxy Friday: Pick five things to recommend, I was challenged. I thought about it, pouring over all my old interests, the shows I’ve watched and books I daydream of reading over again. For some reason, the most popular things always seem to miss me. I mean, I’ve seen Star Trek and Star Wars…but it’s the entertainment that’s slightly more outside-the-box that I keep coming back to.

So here they are. 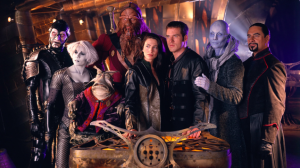 FarScape is the show that I refuse to let time forget. It’s about the travels of John Crichton, an Earth astronaut who accidentally stumbles upon wormhole technology and gets slung-shot to the other end of the universe. There, Crichton accidentally collides with another, alien fighter craft, before being brought aboard a living starship full of prisoners.

Unfortunately, that fighter craft happened to be piloted by the brother of a Peace Keeper fleet commander, who obsesses about getting revenge on Crichton. The rest of the show catalogs Crichton and his alien allies’ adventures, the cultural collisions, the exploration, discovery and the constant escapes. The show is full of humor and heart and never fails to entertain. 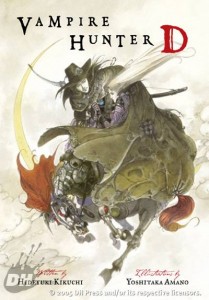 Book / Post Apocalyptic Horror:
If you’re a writer, somethings should be read for no other reason than to stir creativity.

That’s why I recommend reading Vampire Hunter D by Hideyuki Kikuchi. Set in 12,090 A.D., the world has suffered a devastating nuclear war. The aftermath saw the rise of vampire nobility who ruled humanity. However, recent years have seen decline in their power, thanks to powerful Vampire Hunters. D, the dhampir son of Dracula, is the best there is.

The book series is absolutely packed to the gills with fantasy lore and futuristic twists. Fairy cloning factories, natural and artificial werewolves, cyborg horses. Kikuchi takes everything awesome, mixes it in a pot… and then sets it on fire. The only warning I’ll give is that the translations have not been stellar, so read it with a grain of salt. 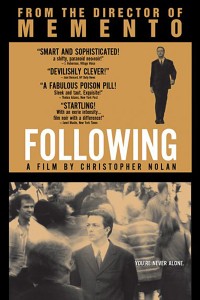 Movie / Crime Thriller:
Perhaps you aspire to be a director someday, or simply like a well told crime story. In that case, you need to watch Following, Christopher Nolan’s very first film (you know, before he was cool). A 70-minute black and white neo-noir flick, Nolan managed to make this great movie… for a mere $6,000.

The story involves a young man who takes to following people in order to gain writing inspiration. One day, he picks the wrong person to stalk, as the man notices and approaches him. Surprisingly, this man introduces himself as Cobb… and admits to being a burglar. Cobb begins training the young man as an apprentice thief.

The film is full of twist after twist, and is told somewhat anachronistically. But if you ever had doubts about being able to make a fantastic film on a low budget, check out Following. You’ll happily be proved wrong. 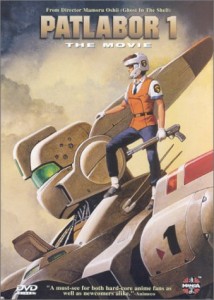 Animated Movies / Police Thriller:
I’ve had more than my fair share of eastern influences in my life. And one of the best wasPatlabor 1, an animated movie about a Japanese police department who handles Labor (large, construction robot) crimes. Their duties vary between simple Labor trafficking, Labor thefts and violent crimes involving Labors. Isaac Asimov was very, very wrong.

But that mundane stuff was left to the television series. The Patlabor movie was big. Huge. A mystery of technological, beyond-the-grave vengeance with incredibly scary Biblical suggestions. It all ties together in a fantastic climax that manages to be both eerie, action-filled… and will leave you a little less inclined to trust technology. 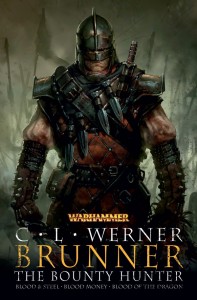 It’s not very often that a character simply commands our attention based on his or her sheer… aura. But that’s exactly what Brunner the Bounty Hunter, by CL Werner, accomplished.

Brunner’s history and identity are hinted at, but never really expounded upon. Instead, most of his tales and stories focus more around the bounties he hunts over anything personal about Brunner himself. Nor does Brunner’s tales put him in the “epic fantasy” vein. This is simply a guy making his daily bread in the Warhammer fantasy setting, and a great way to remind us that not every tale has to be a personal quest, vendetta or ye olde save-the-world-from-the-darkness string.