In 2012 Alasdair Stuart collected his outro’s for horror podcast Pseudopod into a book sub titled ‘Not the end of the World, just the end of the Year.’ It’s a collection that showcases Alasdair’s deep genre knowledge and his very personal and honest style of journalism. 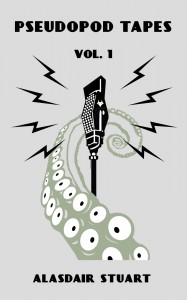 Alasdair Stuart, one of the UK’s most knowledgeable and passionate genre journalists has finally decided to do a book. And not just any book, he’s not just offering up his in depth genre gems for your delectation, it’s better than that.

In the Pseudopod Tapes, Alasdair gathers a years worth of outro’s from one of the worlds leading horror podcasts and collects them all together for you in this volume. Stuart hosts Pseudopod with a sharp wit, clear insight, tremendous honesty and warm humour. It translates extremely well to the page.

‘Alasdair Stuart, host of the must listen Pesudopod just became a must read!’ -Steven Savile

If You Like Books Vol 1 :  Stuart acknowledges that the zombies scratching at your door might be real or imagined, but if you don’t escape them they will eat you alive. The goosebumps and raised-hairs on the back of your neck might just be an evolutionary quirk, or they might be the very thing that keeps you safe from the monsters under the bed.

BFS reviews : Each little piece is a gem: insightful and intelligent, and I often find myself re-evaluating a story, or examining my own opinions or my whole life, based on Alasdair’s little snippets of wisdom

Sunday in the Park With Bruce

Let’s talk about comics for a minute. Grant Morrison, Scottish comics writer to some, electric wizard of the post human post millennium new fiction zeitgeist to others, is engaged in an interesting experiment with his current work on Batman. Morrison is telling a multi-year story, across multiple titles, exploring the character from every possible angle as he delves deeper not only into the psyche of a man who dresses like a flying rodent to frighten poor people, but also into the nature of fiction and fictional reality. He’s done this before, the fiction suit idea toyed with in The Invisibles for one, but he’s rarely done it in more detail and at more length than he has with his Batman work. Batman is, after all, a man with a lot more history and life experience than pretty much everyone reading him. To borrow a quote from another Scot, and horribly mangle it, Batman and Gotham City, his home has been mapped out of obscurity into street by street reality.

Don’t believe me? There is a map of Gotham City, initially designed for the No Man’s Land story years ago which has now been modified and adopted by the Christopher Nolan-directed Batman movies and the Tracy Hickman written novel, Wayne of Gotham. A fictional city is not only mapped down to individual blocks, that map is carrying across different media. Morrison talks, a lot, about fictional reality and is on record as saying he believes the DC universe is sentient and it’s only a matter of time before we make first contact. He’s been saying that for a few years now, and whilst I think if we ever do make fictional contact it’ll be with a certain madman in a blue box, but I can see his point. After all, Gotham City is now the same across three media. It’s growing, extruding, reaching out, the amalgamated geography of hundreds of creative teams’ work, a city made of stories, gleaming in the early morning light. A model ecosystem made of fiction.

But where does the model end and the art begin?