Lots of the skulk are going to be at FantasyCon this year and many of them are on panels, but we also have a few signings going on!

K.T. Davies will be signing Breed at the mass signing on Sunday, we will have some copies available but feel free to buy in advance and bring it with you to avoid disappointment. Breed is on the shortlist for Best Fantasy Novel so we will be chewing our nails at the awards ceremony! 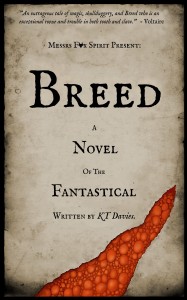 Additionally Steven Savile will be signing King Wolf and Steve Lockley will be signing Always a Dancer & Other Stories over at the Pendragon Press table at 4pm on Saturday. There might even be cake!

Pendragon have kindly agreed to host a small number of Fox Spirit titles for the weekend which will be available from Saturday morning. The Lonely Dark by Ren Warom, The Elkie Bernstein novels by Jo Thomas and European Monsters will also be available in limited numbers.

I was reading an excellent article on gender and stereotyping in fantasy over at Fantasy Faction and thinking about our books.

K.T. Davies rightly pointed out her lead in Breed has no identifiable gender stated, although interestingly many reviews assign one to the character. I think we do this without even realising. I also think here at Fox Spirit we do pretty well on having varied approaches to our female leads, we’ve even had one who is a fish. In Drag Noir we focussed particularly on gender as a variable scale ecouraging writers to look at and challenge typical gender roles.

In amongst all this it occurred to me that many people who have started enjoying Fox Spirit over the last three years may not have picked up on all the things we have out there. So with our new third year of our existence starting, we are going to revisit our previous releases. Starting topically with Breed.

‘After Breed, a Guild Blade of small renown, is chased by a dragon, tricked by a demon, almost killed by a psychopathic gang boss and hunted by a ferocious spider-like arrachid assassin life really takes a turn for the worst. Sentenced to five years bonded servitude to a one-handed priest magician, Breed must find the hammer of the ancient hero known only as the Hammer of the North within a year and a day… or else. And so, with only a drug-addicted vagrant, a rat-faced child, and a timid priest for back up, Breed sets out for the mighty city of Valen and the tomb of the Hammer. What could possibly go wrong? I’ll give you a clue. Everything!’

You can read the amazon reviews in full here

‘I can’t recommend Breed enough. It hits the ground running (literally) and drags you happily with it until the end when you start screaming for MORE!’ Amazon reviewer.

The opening paragraphs for your reading pleasure:

There’s nothing quite as exhilarating as headlong flight, when fear of the unknown is banished by the sure knowledge that whatever lies ahead cannot be as dreadful as that which is behind. It is liberating, like being a child again. Although, truth be told, as wild as my childhood was, this was the first time I’d ever been chased by a dragon.
Even though my situation was rapidly sliding from dire to fatal, every fibre of my being sang with the sheer joy of being alive. I let out a loud whoop! It was a challenge, an exultation. Not to be outdone, the dragon answered with an ear-splitting roar and spewed a mouthful of frosty bile in my direction. I dodged into a stand of knotted pines. A wash of ice glazed the copse, leaves shattered like glass, trunks and boughs cracked like old bones. I escaped all but the merest lick of cold fire but that slight splash was enough to peel the skin from my shoulder. I stumbled, arms windmilling, feet scrabbling for purchase. The second I regained my balance, I dug my claws into the ground, and propelled myself down the mountain. My thoasan father had blessed me with his race’s superior speed and agility, alas; my human mother had cursed me with the stamina of her breed. The pace was hard and the furious dragon was devouring my lead with every beat of its coriaceous wings.

Please join us next week for another ‘Revisited’