When I was approached at the beginning to illustrate a series about monsters from all over the globe, the first thing I thought was “Wow – what an opportunity!”. As a child, my visits to the local library in the Irish small town of Kells in County Meath, were always a chance to scour the shelves for any kind of monster or folklore-related books I could get my hands on. These books often contained stories translated from other languages and depicted tales of creatures that were both thrilling and horrifying in equal measures. The illustrations were sometimes few and far between but the ones that were there were definitely something I’d never forget. 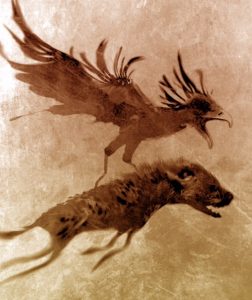 Growing up, my tastes moved more towards comics and graphic novels, particularly the likes of 2000AD and other British and American publications. I was always drawn to the darker sides of these comics and in particular the work of some incredible artists who have since gone on to achieve worldwide recognition. While I could never aspire to their level, I always felt that some of these artists influenced my own creative style and certainly provided inspiration for a lot of the darker elements of my own artwork. Around this time, I also became interested in adventure game publications such as D&D-themed Fighting Fantasy books, and the now-forgotten Proteus magazine, which also contained amazing illustrations of ghosts, demons and monsters that were beautifully rendered in ink and pencil. These creatures are often depicted in amazing 3D detail in modern video games but in the mid 1980’s, comics and board games were really pushing the boundaries of what could be achieved in fantasy art. 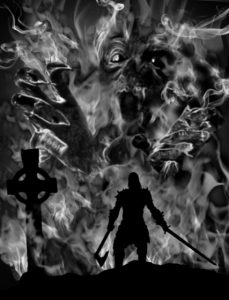 Being asked to illustrate the Monster series felt like I had come full circle – here was my opportunity to actually be involved in producing something that I loved as a child, while also collaborating with other amazing artists and authors. There was no way I could say no. I’m proud to say that my illustrations featured in all of the books in the series, and in the process I discovered new creatures and tales that I had never even imagined. My young self would have definitely approved…

Kieran Walsh is an Irish artist living and working in the UK. Based in Leicester, he has worked for over fifteen years delivering community-based arts programmes in disadvantaged areas. Kieran works in a broad range of media, from digital art to sculpture, as well as more traditional crafts including knifemaking. Kieran has illustrated stories in all the seven monster volumes from Fox Spirit Books.