We really appreciate the extra effort some of our authors go to in providing these blogs and this would have made an excellent New Year Eve post, so my apologies to Maria for the lack of timing on this one.

Ded Moroz (The Old Father Frost) is a personification of deadly winter cold, and (presumably) an old chthonic god of Slavic tribes confronting deadly continental winter in their poor huts. In Russian fairy tales he still bears relic features – for he may be generous and reward the meek and obedient, but be deadly to those who is obstinate and greedy (and he is still the same in the children’s Soviet film “Morozko”).

During the period of Modern with its inevitable revival of “the Russian national spirit”, Moroz became an object of both poems and plays – where he was still presented as the incarnation of the terrible Russian winter.

But after the October Revolution (1917) an interesting transformation took place. Bolsheviks aiming to substitute religious feasts with the “new” and “atheistic” dates, considered X-mas and even (from 1927 to 1935) the New Year’s Day as “bourgeois” and “ideologically inimical”. When returning New Year’s Day, it was appointed to be a substitution of X-mas and subsequently it was purified from all Christian connotations. Even the Star on the top of a Christmas tree was now the Bolshevik symbol. The problem was: who would substitute Saint Nicolaus, children’s favorite personage? And so Ded Moroz (just an ideologically harmless frost, not a dangerous Saint) was chosen for the role.

And thus it happened – the old and cruel chthonic god became a bearded jolly old man in the red or blue caftan visiting children with gifts on the New Year’s Eve. But of course, it is only a mask, we ourselves know who he really is, and if not – read my short story. 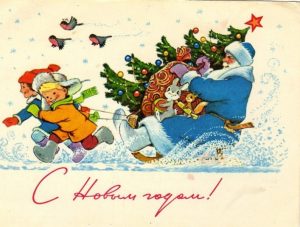 Maria Galina is the author of several fiction books, including several novels and the three short story collections Red Wolves, Red Gees (“Krasnye volky, Krasnye gusy”), Chicken God (“Kuriny Bog”) and Not Looking Back (“Ne Oglyadyvayas”). Several of Maria’s novels (Iramifications, Autochthones and Malaya Glusha) and short stories are translated to many languages such as English, French, Ukrainian and Polish. Her short stories can be found in anthologies like Glas New Russian writing, Moscow tales: stories, and Racconti russi al femminile. She’s also awarded for her work in the speculative fiction field and has received many awards, including Personal Boris Strugatsky Award (Saint-Petersburg, Russia), Portal award (International SF Convent, Kyiv, Ukraine), and Readers’ award (Big Book Award, Moscow, Russia). Maria is also a prize-winning poet and a translator of English poetry and SF—she for instance translated Nnedi Okorafor’s Binti into Russian. Maria was born in one of the oldest Mid-Russian town—Tver, and lives and works in Moscow. Find more information about her at https://fantlab.ru/autor1342 and https://en.wikipedia.org/wiki/Maria_Galina