Into the Drowning Deep

To my perpetual annoyance, I’ve never been able to get my hands on Mira Grant’s novella Rolling in the Deep, despite it only coming out in 2015.  I mean, mermaids and Mira Grant is a combination that shouldn’t be missed, amirite?  So the publication of Grant’s Into the Drowning Deep was an immediate buy and I’m not kidding, I have read it at least four times in the last year.

Fortunately, despite Into the Drowning Deep being a follow-up to Rolling, you don’t have to have read the latter to get the full thrills and spills experience of the former. In fact, the necessary details are effortlessly slid into Drowning’s narrative so it gives you the bonus of two books in one! 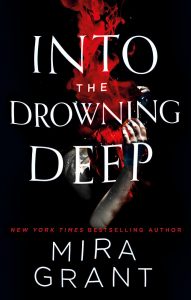 So, what’s it all about?  Seven years ago, Imagine Entertainment sent the cruise ship Atargatis to the Mariana Trench to film a mockumentary about mermaids.  (Thus, Rolling in the Deep.) Unfortunately for them they found real-life mermaids and the mermaids were not friendly.  History records that all crew and passengers of the Atargatis disappeared, surviving footage shows fragments of the tragedy but most of the viewing public is in two minds on the veracity of what was broadcast.

Tory Stewart, however, is certain the Mariana mermaids are real. Her older sister was one of Imagine’s media personalities working on the Atargatis for the ill-fated mockumentary, and Tory has spent her adult life trying to find hard evidence to prove the truth of what happened to her sister.  After spending years studying marine biology, with a specialisation in understanding the information sonar readouts give about deep sea population, Tory and her lab partner, Luis Martines, discover sonar evidence of something hinky going on in the depths of the Mariana Trench.  And as it happens, Imagine Entertainment are just about ready to launch a follow up mission to discover the truth about the Atargatis and the mermaids. (And fulfil the inevitable corporate dodgy interests along the way. But then, you’d expect nothing less…)

Tory and Luis get invited to be a part of a crew that includes ex-eco-warrior and infamous mermaid expert Dr Jillian Toth; Olivia Sanderson, Imagine’s latest media face; and a motley crew of others who include extreme big game hunters, corporate representatives, scientists of various stripes and trained dolphins. (And yes, the dolphins get a point-of-view chapter of their own!)  Some believe the mermaids are real, some don’t and are just in it for the corporate funding of their work, either way, no-one is ready for what they find when they reach the Trench…

It should go without saying that if you’re reading a book by Mira Grant (or her alter ego, Seanan McGuire) then you’re going to get a healthy range of well-drawn diverse characters centre stage – and Into the Drowning Deep is no exception – here you’ll find characters of a multitude of ages, abilities, sexualities and nationalities, with a delicate balance maintained between recognising their individualities, and exploring how who they are affects their life and interactions with each other.

It’s this kind of easy and consistent representation that makes Grant’s books a must-read, regardless of the specific story, but Drowning is no slouch in the story department either – it’s a juicy romp of a novel that balances monsters of the deep and tense survival horror, with fascinatingly plausible science and a whole host of interesting themes that wind their way throughout. Issues such as environmentalism and the effects of climate change and oceanic depletion form both the foundation of the world setting, and the motivating force for the mermaids’ recent emergence and desperate mass feeding behaviour.

Communication and alternative perspectives are also strong threads that tie the story together – we see the story from the viewpoint of a range of humans, as well as from the mermaids, and the ship’s dolphins, creating a multi-directional view of both general life in the depths and of this particular story of the sea.  But beyond that, there’s a constant push and pull of communication efforts as disparate people try to bridge their differences to find common ground to be understood – from the obvious attempts of humans bodging a common language with dolphins and mermaids, to the more subtle shades of human communication where neurodivergent personnel have to navigate the shifting and often confusing behaviour and language of neurotypicals; or deaf scientists have to find ways to work with the hearing, both with and without the aid of the resident sign language interpreter.

Each thread, and each perspective, makes the story that much richer and when you add to that some intriguing scientific concepts and the sheer pulpy horror fun of killer mermaids swarming a cruise ship in the middle of the ocean, what you’ve got is a magnificent tale to chill your bones over the Christmas period and beyond!  Highly recommended!