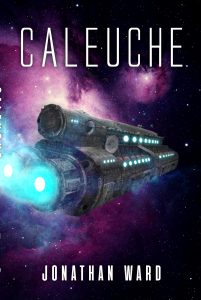 Our fantastic web serial is almost over. Go back to the beginning and read it all.

I held the rose agate pendant so tightly in my grip that the contours pressed hard into my flesh. They were taking her away from me. She was screaming my name. Telling me not to save her.

And somewhere, Lien was crying. Lien, the feral child on board Starfang. Her large eyes swam with glistening tears.

I started awake, my heart pounding so hard it was painful. The ship was thrumming with a rhythm that immediately informed me that it was pushing its engine drive. It was moving hard, in one direction. Was it being pursued?

The dream hollowed me out. I cleaned up with a sense of grimness heavy in my limbs. The food was late again. I sipped the water, feeling the clawing demands of the hunger. Hurried footsteps halted in front of my door and a tray slid in, rattling loudly. There was only two slices of bread this time. As I paused to retrieve the tray, the footsteps pounded away with an urgency I found intriguing. S’sahrak was late too. S’sahrak was never late.

I pushed myself into nangun drills, ignoring the biting pangs in my stomach and in my veins. I kept the visions of April, my Pack-crew and Lien before me, goading myself on. Somewhere, they lived and that mattered.

Would they accept me, an addict to craz?

The ship suddenly shook significantly to knock me off my feet. I rolled onto my haunches, using my hands as traction. I was too experienced, too ship-wise, to know that was a strike on the ship’s flank, possibly starboard. When I carefully got up, another strike rattled the ship, a warning blow this time. Two ships seemed to be firing their cannons at it.

The door slammed open and S’sahrak stepped in. Immaculate and precise the shishini was, I sensed it was disturbed and harried.

“Please come with me,” S’sahrak said. Its rosettes were vivid brown now. I noticed the pistol hanging by its left side. It was an assault-type weapon used by many clans.

Two black-armored guards backed S’sahrak, carrying heavier weapons. They meant business, right down to their visored faces. I also smelled wolf off them. So, I was indeed on a clan ship. I inclined my head and walked out obediently. I couldn’t stare down the wolf guards – they must be trained to ignore the instinctual reactions when it came to more dominant clan members. I reined in my urge to escape – wait, Francesca, wait. Not now, not now.