A Winter’s Tale, or how I owe my story The Wolf Moon to Boscastle’s Witch Museum.

Diana, the huntress. Her mother called winter a time of silence. For Diana, most of her life is quiet, her only companions wolves. Known as a witch by those in the human settlement even her rare visits to town are unwelcome.

Gabriel, named after the angel; although he’s no heavenly messenger, he refuses to trap what the locals want him to catch. When he sees Diana, he’s on the hunt for different prey.

Two people, strangers to each other, both outsiders… A harsh winter is upon them, but when their paths cross it will take a little ingenuity to survive the coldest of seasons.

Shiver under The Wolf Moon, one of a collection of Winter Tales.

Many winters ago, more than I care to consider, I picked up a book called The Witches’ Almanac. I chose it for a love of all things mystical, but also owing to one of my numerous visits to The Witch Museum, at Boscastle, in Cornwall. 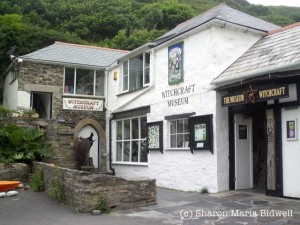 The unmistakable white and black building has housed the largest accumulation of historical witchcraft memorabilia and been a component of Boscastle’s landscape for fifty years. Originally founded on the Isle of Man by Cecil H.Wiliamson the museum’s survived various guises and displacements (at times Williamson received death threats and after nasty occurrences to encourage his ‘moving on’), until eventually finding its current situation sited right by the harbour. Many feared for its contents following the flood of 2004, but the collection survived that, too, guarded in recent years by a wicker representation of Pan.

I might not have looked at the Almanac if not for that visit and The Wolf Moon among other titles would never have come into being. The book inspired several stories, some of which I plan to publish individually in anthologies with the intention of creating a collection. As to how the idea of the story of Diana and Gabriel developed from nothing more than a title and a short list of items, it can be difficult to describe the process particularly when I’m a ‘pantser’ — someone who ‘flies by the seat of’ and often sits down with a vague notion with which to face an empty page.

My moniker Sharon Kernow (the cornish word for Cornwall) is something else that may never have come into being if not for my love of the county and all things mystical. It’s where my heart lies, where I long to live, and more a part of me than any other place I’ve visited. When deciding to brand my Dark Fiction there was no better name.

For those who can spare a few minutes to linger, here is some footage of the local area and the witch museum as it was in Cecil’s time.

Link to the film, embedding code below: