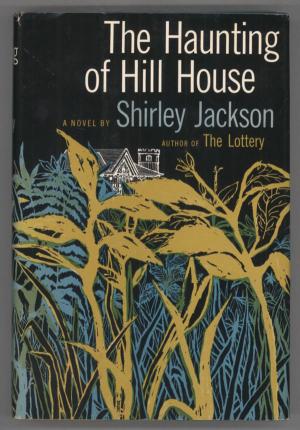 I would probably vote Shirley Jackson’s novel The Haunting of Hill House the finest American novel if I were the kind of person who believed those sort of hierarchies mattered. All that matters is that this book is enormously good. Jackson was a stunningly skilfull writer who wove a kind of magic that retains all its astonishing power half a century later. There are ghost stories long before it, and of course many after, but there aren’t many I’d mention in the same breath. Jackson would be remembered forever just for writing ‘The Lottery’, a short story that still packs a wallop, but she didn’t stop there.

She wrote several novels that shine with a rare genius for dislocating reality just enough to make you trip over your assumptions. Sometimes I think We Have Always Lived in the Castle is just as brilliant as THHH but then I think who cares? They’re both brilliant. And then there’s Hangsaman and The Bird Nest — and all the humour, too. Horror and humour both require impeccable timing.

There’s something indelible about the experience of wandering through Hill House. I’ve taught it before and each time I have had students become firm fans of Jackson. I can’t read the opening lines without shivering:

No live organism can continue for long to exist sanely under conditions of absolute reality; even larks and katydids are supposed, by some, to dream. Hill House, not sane, stood by itself against its hills, holding darkness within; it had stood so for eighty years and might stand for eighty more. Within, walls continued upright, bricks met neatly, floors were firm, and doors were sensibly shut; silence lay steadily against the wood and stone of Hill House, and whatever walked there, walked alone.

The book wraps you in that same mantel of unease. You can’t trust what you’re told and you’re right not to trust it, but Jackson is so meticulously precise like those firm floors and neat bricks that you start to believe and then just as suddenly you’re lost. And alone. Most of the story is filtered through the hapless Nell — Eleanor Vance. Freed from the shackles of her late mother’s sick room, and her sister and brother-in-law’s suffocating paternalism, she’s at first elated by the opportunity to be on her own with no one to tell her what to do. She’s thirty-two but finds herself on the side of the little girl who refuses to drink her milk in a roadside cafe because she doesn’t have her ‘cup of stars’:

It’s impossible not to sympathise with Eleanor and her fragile newfound freedom as she joins Doctor Montague’s psychic experiment crew which he hopes will prove the reality of spectral phenomena in the legendary house. The bohemian artist Theo offers a sharp contrast with her confidence and sophistication, alternately befriending Nell then growing impatient with her neediness. My students are always dead certain that Jackson tells us Theo is a lesbian, but being asked to prove how they know that brings them up against Jackson’s primary skill: leading the reader where she wants them to go without their realising how they got there.

Even now I find myself re-reading passages to figure out how she does what she does and the magic is often elusive.

It’s somewhat puzzling that Netflix has greenlit a series based on the book. Perhaps they will eschew the novel and invent a backstory. It’s hard to imagine a visual adaptation better than the 1963 film directed by Robert Wise with Julie Harris and Claire Bloom along with the irrepressible Russ Tamblyn. When I’ve taught it in my horror film course, students who sniff at B&W films end up breathlessly rapt during the ‘knocking’ scene. There’s nothing much in the way of special effects: the knocking on the walls, Harris and Bloom terrified, and a door that almost seems to breathe. But when Nell whispers, ‘Whose hand was I holding…?’