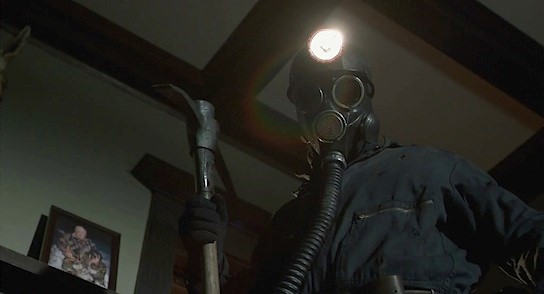 My Bloody Valentine: Jaws in a Mine
by Kerry Fristoe 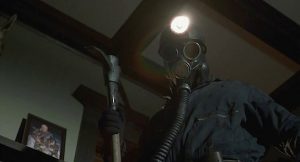 Following in the tradition of Grizzly in 1976 (Jaws on a Mountain), Snowbeast in 1977 (Jaws on a Mountain or Jaws Is a Yeti), Piranha in 1978 (Lots of Tiny Jaws in a River), and 1980’s Alligator (Jaws in a Sewer with Hunky Robert Forster), the 1981 Canadian slasher, My Bloody Valentine (Jaws in a Mine, Eh) features brutal murders reported as natural causes by local authorities to save a town from financial ruin. I started to write a detailed description of who played whom in each of these modern classics, but it was going on way too long, so I made a handy chart. Oh, and I’m not being snarky about the modern classics line. I dig these films.

Two miners, dressed in coveralls and gas masks, walk through a debris-littered mine shaft. They stop in a deserted corner and one of them undresses, revealing that she’s a beautiful, blond woman. As the pair caress each other, she tries to remove her partner’s gas mask. He resists her efforts and they continue with their tryst, breathing harder. As he grasps both her arms and lifts her, she closes her eyes expectantly, and he impales her on a pickaxe.

I’ll admit, that opening rivals Chrissie Watkins, clinging to a buoy, and the unexpected first kill in My Bloody Valentine sets the stage for the carnage to come.

It’s February 13th in Valentine Bluffs, Nova Scotia, and the entire town is preparing for the first Valentine’s Day dance in twenty years. The tradition ended two decades before when selfish mining supervisors, impatient to dance the night away with their dates, left the mine without ensuring the safety of their men. After a sudden explosion buried several miners, the townspeople rushed to dig them out, but they were too late. The rescuers got there just in time to see Harry Warden eating the remains of the others. Harry’s ordeal left him a little short on sanity. He runs amok, killing the men responsible and is committed to an asylum, vowing that if the town ever holds another Valentine’s Day dance, he’ll kill them all.

Apparently, they forgot about Harry and his promises. As the decorating and general character introductions continue, Mabel, the town person-named-Mabel, dies a grisly death at the laundromat and gets stuffed in a dryer. Not wanting to cause a fuss right before the Fourth of July Valentine’s Day, Chief Brody Newby (Don Francks) tells everyone it was a boat accident heart attack.

“This was no laundry accident.”
-Hooper, chewing on a Tide pod

The chief goes on with his day, the way you do when you find the mutilated body of a friend in a clothes dryer. He figures it’s an isolated incident. You know, probably kids. Everything changes when he opens a heart-shaped box of chocolates containing a human heart. I prefer caramels, myself. He cancels the dance and calls the sanitarium in a panic, looking for Harry. While he waits for a testy clerk to find Harry’s file, those darn kids decide to foil the chief’s non-plan and throw a party at the mine anyway. They start out partying in the canteen, but a few intrepid souls head down the mine for a little kinky mine fun.

By now we’ve met the cast of characters. Paul Kelman plays TJ, the mine owner’s son, who had the audacity to leave town and come back, so people look at him funny. Axel (Neil Affleck-not that one) is TJ’s former best friend who now dates his former best girl, Sarah (Lori Hallier). Keith Knight (Fink from Meatballs!) is the big, good-hearted Hollis, and Alf Humphreys plays Howard, the asshole.

When Chief Newby finds more corpses, he heads to the mine to stop the party—and the murders. Guess what? He’s too late. My Bloody Valentine is chock full of creative kills. The director, George Mihalka, and effects crew take advantage of the mine’s dark, claustrophobic setting to ramp up the spookiness factor and the murders are straight up gory. Harry favors pickaxes, boiling water, and even a shower to fulfill his promise to Valentine Bluffs.

I have a soft spot in my heart for My Bloody Valentine. I saw it in the theatre when it came out—with a boy! I had seen Friday the 13th in the theatre the year before. MBV has more heart (teehee) than the Voorhees family picnic and the characters are more likable. I don’t think I made the Jaws connection at the time, but I may have seen Jaws and the gang of copycat killer bear/Yeti/fish/gator/octopus/swarm of bees/other shark/still other shark/piranhaconda films one or two more times since then.