FOREWORD to DRAG NOIR by editor K. A. Laity

I wanted to be Jim West. The hero of the television programme Wild Wild West played by Robert Conrad epitomized cool as far as I was concerned as a kid. He looked slick, fought bad guys and lived in luxurious style in a train caboose with his pal Artemus Gordon—every week a new location and a new adventure.

But more than that, the look: that snugly fitted suit, short jacket, broad shoulders and black boots. Sure he did spend a lot of time shirtless and tied up, too. Somehow at the advent the androgynous glam rock look of the 70s and the nascent punk scene, anything at all seemed possible—at least until my body betrayed me with the double-whammy of adolescent hormones and a thyroid that tipped over into overdrive, hitting my rangy frame with unexpected curves and bewildered loss of identity. 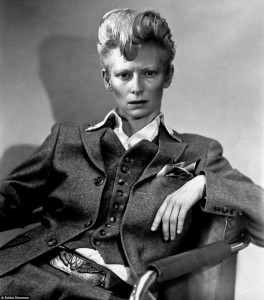 I grew up with two brothers, four baseball diamonds and a football field behind my house, so I played a lot of sports. Yet when I started school I was expected to wear dresses. I wanted to be the boy in My Side of the Mountain but it was a revelation to see Karen Carpenter play drums because it was a thing girls weren’t supposed to do. I was a guileless and mostly unaware child so it came as a bit of a shock when I realised there was a great deal of anxiety attached to who I was supposed to be. I failed so much at being a girl that I was sent to charm school, a racket run by the local department store.

My adolescent discomfort sprang largely from being forced into a category that didn’t fit me, as much as it did with being trapped in one place when I wanted to travel the world. Academia belatedly taught me an essential term: slippage. Our brains like to categorise things into distinct pigeon-holes, but nature just bleeds into the margins. I like slipping between categories (as these noir mash-ups show). Then as now I hated to be pigeon-holed. On my website I quote Kierkegaard: “Once you label me, you negate me.”

It’s no wonder that I took to gender studies like a PI to trenchcoats; it explained the discomfort I had struggled with for so long—and proved I wasn’t the only one. It gave me so much more to think about when I considered my own childhood (not to mention two men living together in a caboose—hello!). Judith Butler showed me gender was constructed by culture, just as I’d always intuited. She instilled in me the love of playing with those conventions consciously, testing people’s reactions, and teaching students to be conscious of them as well.

But it was Ru Paul who cut to the essential: “We’re born naked, and the rest is drag.”

Manufacturers seem to have doubled down on building the great gender divide; all you have to do is look at the ‘girls’ aisle in any toy store—a throbbing pink ghetto. Toys that were bright primary colours a couple decades ago now receive a varnish of glutinous pink. The ‘princess’ industry is reinforced 24/7 on the Disney media empire of television and radio. Maybe it’s the last ditch backlash against a broadening culture that not only recognizes the rainbow spectrum of genders, but increasingly celebrates them. I’m all onboard with the Pink Stinks camp, but maybe princess power isn’t as monolithic as I sometimes fear (given my tomboy self). I was pleasantly surprised the other day when the Executive Toddler (3) and her brother (9) were on scooters, which he reminded her both belonged to him, when she told him imperiously that she liked ‘boy things and girl things’. I leaned over and said, ‘I’ll tell you a secret: there aren’t really “girl things” and “boy things”—there are only “things”‘.

You can spend your life trying to protect the divisions between categories, but nature bleeds through the barriers. That’s why we have parthenogenesis. Nature will find a way. Try too hard to maintain those artificial borders and you’re bound to fail.

Of course noir is all about failing, but it’s also about shadows, surfaces and a lot of grey areas. Hiding and revealing, deceptive appearances, buried truths: the stories here run the gamut. So do the writers: some I knew already, others I didn’t at all. I was disappointed to have so few drag king stories, but maybe that leaves room to revisit the topic. I had no idea what I would get, but I was pleased with the results. I hope you are too.