It’s the early 1990s and I am living on the Isle of Man. I am a teenager. I am a geek. I am an idiot. I am a walking open wound working his ass off to be the best student possible, keep his parents’ stress damaged psyches together and  not look the fact his best friend is looking at a third go round with cancer in the face quite yet. My adolescence is trench warfare. I am holding the line. It sucks.

I’m 15? I’m 6’1.  I can pass for 18 comfortably. I don’t drink. I don’t do drugs. I don’t smoke.  There are two videos stores nearby. And on one of my many forays there I find the first collection of War of the Worlds: The Resurrection.

This is the 1990s so it’s basically the dark ages in terms of entertainment deployment systems. What you get is three episodes on a VHS cassette released every couple of months. I watch the pilot until its threadbare, do the same with the rest.

The reason is twofold. The premise of WW: The Resurrection is PEAK 1990s and more importantly peak Me. In the wake of the Grover’s Mill assault depicted in the 1950s movie, the Martians are sealed in barrels and presumed dead. Their technology is mothballed, mass hysteria is assumed to be the cause of the event and everyone settles in to really enjoy the cold war.

Until nuclear waste wakes the aliens up. With all new, all-gore spattered bodysnatching abilities they set out to conquer the planet again and only an elite crisis response team can stop them. Let’s go say hi. 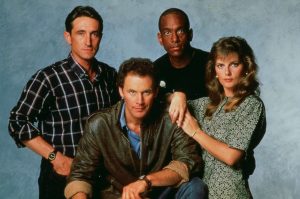 Look at that epic ’90s hair. Back left is Colonel Paul Ironhorse, a Native American, hyper-right wing soldier and veteran.  Next to him is Norton Drake, A paralyzed computer hacker and high end martial artist (Philip Akin would go on to be given MUCH more to do in the excellent Highlander TV series). Bottom right is Doctor Suzanne McCullough, a microbiologist and extremely disciplined precise scientist. Also a single mom.

And bottom left is Doctor Harrison Blackwood. A pacifist, vegetarian who was raised by the hero and heroine of the original movie after his parents were killed in the first attack.

So basically, Clever People Versus Aliens: The Series

There are two take homes from this; the first is that the 1990s were MUCH better at diversity and yet still tropey as Hell than a lot of current TV. The second is that Doctor Blackwood, all 6’2, gangly, over articulate nerd of him, was one of the first times I saw myself.

Harrison was kind, weird, funny and open-minded. He was endlessly enthusiastic, endlessly positive, a Doctor Who in a plaid shirt with none of the hand wavy nonsense or bow breaking decades of continuity. He was a hero who was clever. He was a hero who was BIG and clever. To me, trapped in a meatsuit that seemed three sizes too big and that automatically put 5 years on my perceived age and 10 points off my IQ in the eyes of strangers, Harrison was a lifeline, a message in a bottle:

The show was occasionally brilliant, there’s an especially fun return to Grover’s Mill episode that I can still hit pretty much every plot beat of. It was also frequently gloriously, exuberantly bad in the most wonderful 1990s way possible. Hilariously gory, filled with stereotypes and written in a way that meant vital stuff often happened between episodes.

I missed it for a long time.

I may have sketched out a reboot or two.

And  I never forgot Doctor Harrison Blackwood or the effect he had on me. Like Egon Spengler, Jack Killian, Chris Stephens and Henry Rollins he showed me there was a place for me in the world and helped me to get there.

Jared Martin, who played Harrison, died last month. He wasn’t the only one.

Adam West, the single greatest Batman of all time passed away last week. Sir Roger Moore died recently too. As did Andy Cunningham (Bodger and Badger for life, yo) and Peter Sallis, the voice of Wallace from Wallace and Gromit. We lost Glenne Headley this year too, an actress so great she stole a movie out from under Steve Martin AND Sir Michael Caine.

We’ve lived long enough to see our heroes not live long enough. And, in the middle of two of the most turbulent, often horrific, emotionally draining years so far this century, that can be very hard to deal with.

It’s cold comfort at times but the truth is these people and the effect they have on us never quite fade. I still write characters that could be Harrison Blackwood. I still, aspire to be him. Every time we need them these people, these household gods of the digital age, are there for us. We live in an ocean of signal, an age, despite our best efforts, of miracle and wonder. None of us will live forever but all of us, especially the artists we’ve loved, are just a little immortal.  And, for now at least, that’s enough.

Alasdair Stuart is a freelancer writer, RPG writer and podcaster. He owns Escape Artists, who publish the short fiction podcasts Escape Pod, Pseudopod, Podcastle and Cast of Wonders. He writes for Tor.com and MYMBuzz and blogs enthusiastically about pop culture, cooking and exercise at Alasdairstuart.com, and tweets @AlasdairStuart.