So I’ve been thinking a lot about nostalgia recently, and how it connects to both escapism and the Overton Window.

There are jokes this month I SWEAR.

First off, nostalgia! It’s what was for dinner when you were a kid! You seem to remember!

We always look at the past through rose tinted glasses, even the parts of it which were less the best days of our lives and more the days of our lives we just had to GET.THROUGH. Things were easier in the past. TV was better. Adulting is hard. We didn’t used to be tired all the time.

At least two of those things are true but those Rose-tinted glasses are not twenty-twenty. Yes, I had more free time when I was 16. I also had dial up internet access, VHS video tapes and there was a single pizza joint within 30 miles of my house. We focus on the stuff that’s easy and fun because it was easy and fun. We don’t think, a lot of the time, about the awful stuff. Just the day to day drudge, that sense we sometimes get of these just being the weeks we have to get through to reach the next bit that’s good. Kate Bush once sang ‘Just being alive, it can really hurt’. She was right. Also being alive can often be really REALLY irritating and while I choose to believe that was in early drafts of the song, I feel the version she went with scanned better.

So nostalgia is an understandable reaction, especially in 2017: Year of The White Hot Garbage Fires Running The Western World. And that’s what leads to escapism.

I am a huge fan of escapism. I am sane and healthy in no small part due to being able to escape into a movie for two hours at a time. If anyone ever tells you escapist fiction is inferior or unneeded yell at them to get off your fucking dragon and fly back to your ice cube castle because it’s a lifesaver and you need it. In fact, I’d say escapism is mandatory now more than ever. We are almost incapable of being free of extra signal and the temptation to always be connected is a very strong one. It’s also one that will first exhaust and then kill you. Don’t let it. Escape.

Where I have an issue is where the two combine. Nostalgia, especially in genre, is more endemic than grumpy chaps in hoods, short people on walking holidays to volcanoes and female and POC authors being erased from the collective narrative.

Actually not as much as that last one.

Seriously though, throw a rock and you’ll hit something bemoaning the lack of golden age rockets, or pulp storytelling or the sort of stories that were told when all this was nowt but fields. It’s perpetuated by the success of genre fiction’s biggest TV shows and movies too. Star Wars began in 1977. Doctor Who is over 50 years old. Star Trek was airing for the first time during the Vietnam War. The future really is yesterday or sometimes seems that way.

And that brings us to the Overton Window. Here’s how Wikipedia describe it:

The Overton window, also known as the window of discourse, is the range of ideas the public will accept. It is used by media pundits.[1][2] The term is derived from its originator, Joseph P. Overton (1960–2003),[3] a former vice president of the Mackinac Center for Public Policy,[4] who in his description of his window claimed that an idea’s political viability depends mainly on whether it falls within the window, rather than on politicians’ individual preferences.[5] According to Overton’s description, his window includes a range of policies considered politically acceptable in the current climate of public opinion, which a politician can recommend without being considered too extreme to gain or keep public office.

And here’s a picture: 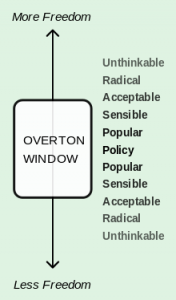 Substitute the Overton scale for a timeframe. Park that time frame over the Victorian Era at one end and the 1970s at the other. That’s the period that influences a remarkable amount of genre fiction, even now. That’s in part because we live in a world where decades old cultural behemoths stride the zeitgeist plains like merchandise friendly lobstrocities from the end of The Mist. But it’s also partially because that time frame is what the culture we’ve grown up in draws from. It’s like the old marching song ‘we’re here because we’re here because…’. We’ve always lived in the Castle. We’ve always drawn inspiration from and escaped to these time periods.

Wouldn’t it be great if that changed?

Wouldn’t it be great if we could shift that window forward in time and, in doing so, provide a new cultural foundation for a whole range of stories?

I can even give you an example. Life on Mars was beloved, and deservedly so, in the UK. It wa as fiercely smart, metaphysical and metafictional take on the traditional cop show. Chock full of stereotypes that it also interrogated and satirized, it was deeply weird, profoundly odd TV.

Not just because the addition of a female lead changed the show’s perspective immeasurably. Not just because it provided answers to every question Life on Mars left dangling. It was better because the cultural frame of reference was noticeably different. Instead of yet another British TV show trapped in the dour, blocky cars and terrifying facial hair of the 1970s, it was catapulted forward into the 1980s.

I was a kid in the ’80s in one of the most rural areas possible. Vibrant, and often awful, music and fashion aside it still frequently SUCKED. Seeing that acknowledged in Ashes to Ashes, as well as the amazing music and clothes, made the show feel completely unique even as it was woven from very familiar cloth. It felt, as the series both opened and closed, that we’d made some progress, that things had been, like the man once said, pushed forwards.

That doesn’t happen enough. But it does happen some and increasingly in a manner that’s less nostalgic and far more interesting. Firefly’s influence on The Expanse and Killjoys is obvious for example but neither show is beholden to their predecessor. Killjoys uses a multi-ethnic future to explore both the ethics of being a professional killer and the future of human society. The Expanse puts the diversity equations that Firefly toyed with front and Centre and resolves them into one of the most interesting, well rounded casts in recent history. And of course Stranger Things drags that window forward, dumps it over the 1980s and does truly extraordinary things with that time period.

None of these shows do anything particularly new. All of them do what they do extraordinarily well precisely because of what they use to build those familiar stories. They take time periods or influences that sit in living memory and use them as a foundation to do something new and vital in every sense of the word. And right now, that’s absolutely what we need. Something new. A better place to escape into. One where the new future will be built.

There’s a lot of talk about the Golden Age of TV and it always seems to have just finished. I’d argue that by moving that cultural window we have the potential to keep it rolling. Stranger Things was both a massive success and good. The Expanse has just been renewed, as has fellow drawn-from-the-90s show 12 Monkeys. Their success has raised the viability and visibility off the genre which has led to edgier projects such as Falling Water, 3%, The Leftovers and The OA being commissioned. Odds are you don’t like at least two of those shows. That’s the point. They are the antithesis of nostalgia. Something new built from something new and they only exist because of the environment created by the shows built on the nostalgia window.

Nostalgia is fine. Escapism is a basic human right. But like everything else, the tenets of escapist fiction cannot stand still or it will stop being somewhere we escape to and become something we are trapped in. That’s why it’s great that Buffy is 20 years old and still means so much. Because in a few more years, that will become the basis for something new, the window will shift again and we’ll grow, as a culture, again. It won’t be pretty. It won’t be fast. But it will happen. It will be great. And it’ll have a badass theme tune.