Hi! How’ve you been?

Since last we spoke I’ve:

-Attended MidAmericon II where I ran two panels, was on several more and attended a whole bunch.

-Eaten a lot of barbecue.

-Spent four days in Atlanta talking to the various Escape Artists staff we have out there.

-Seriously, it was a LOT of barbecue.

-Come back to the UK where we moved house and town and met the movers at the new place about four hours after getting off the plane.

It’s been a bit intense.

Also it was a LOT of barbecue.

The upshot of this is I’m just about back into the groove and, in returning to said groove, I’ve been thinking about what the next NTFN should be. It was nearly a piece on panel etiquette for audience, panellists and moderators alike and that one may still be coming. At present it’s a page of notes orbiting the phrase ‘DON’T BE AN ASSHOLE’ so I’m guessing there’s some work still to do there.

Instead I find myself thinking more and more about one of the conclusions every panel I saw seemed to either articulate or come close to articulating;

Here’s the thing. Whether talking about tabletop RPGs, computer games, board games, novels, comics or any one of a dozen other art forms there are three truths that keep coming up; there’s more signal than noise, it’s hard to find an audience and that places a very different, very positive obligation on readers.

It’s traditional to think of the cultural atmosphere we move through as being predominantly noise. In a lot of cases it still is; go take a look at Twitter moments or what the trending topics are. Better still, click on any trending hashtag and see how quickly it’s infested with people desperate to get eyes on what they want to talk about, regardless of whether or not it’s relevant. That, right there? Noise.

But it’s noise that we need. Or at least we can work through. Life, as the great philosopher Bueller once put it, moves pretty fast. However he didn’t have a smartphone and the ability to see just how fast life is moving or to understand where it’s going. We do. We’re assailed by so much signal it becomes noise and while that’s a definite improvement it’s also an immense challenge for creators. It’s no longer enough to be better than most people around you or to stick around long enough. Now you have to be unique enough to stand out from a field that’s, by default, orders of magnitude bigger and better than it’s ever been before. 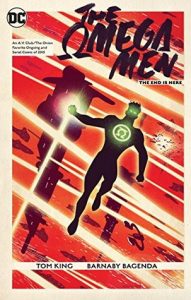 Want proof? Awesome, here you go. The Omega Men is a short lived comic series written by Tom King with art by Barnaby Bagenda, Toby Cypress, ig Guara and Jose Marzan Jr. It was inked by Romulo Fajardo Jr, Tomeu Morey and Hi-Fi and was lettered by Pat Brosseau with covers by Trevor Hutchison. It’s a great series, a Guardians of the Galaxy with blood on its knuckles that explores what happens when the high-handed, naïve optimism of the Lantern Corps is dragged down to ground level. Smart, nasty, complicated fun.

And it got cancelled.

What does this teach us? A bunch of stuff. That comics are a team sport, that single issues are a brutally unforgiving format for mainstream experimentation and that the audience that waits for collections is in some cases much bigger than the people who buy individual issues.

Most importantly, it shows us that great projects can get read as noise when they’re really signal and that, in order to save them, sometimes creators have to shift format to get noticed. The Omega Men is a perfect example of this, a complex, novelistic story better suited to being read in one chunk. Likewise Matt Wallace’s excellent Rencor: Life in Grudge City which started life as a TV show pitch and has ended up as a novella. In each case the story was a near miss in its original format. In each case the story shines in its new format.

And that brings us to the reader. Which in this context could also mean ‘viewer’, ‘player’ and any other name for ‘person interacting with culture’.

There’s more noise than signal. There are countless projects that deserve audiences and never quite get them. That’s partially on the creators or distributors. The rest?

We have never lived in more signal than we do now. We have never been surrounded by more inspiring, brilliant art in every single form than we are now. If you are at least a little invested in modern culture than its almost impossible not to run around like a caffeine-addled child in the biggest candy store in human history trying to get as much awesome into your brain as possible.

That’s fine. In a lot of cases, that’s great. I’m playing Uncharted 4 right now because the first 3 were so great. There’s nothing wrong with returning to wells you’ve drunk from before. There’s everything wrong with only going to those wells. You may not risk as much but after a while that’s all you do, the only places you go. Your world shrinks to nothing but routine when that routine should instead be the foundation of something new. And that something doesn’t have to cost money either. Try a podcast. They’re free, there are countless thousands of them and oddly, I know a thing or two about what’s good there.

It doesn’t have to cost anything but time, but the Reader’s Duty is one we all have. It’s a duty to find new things, to talk about them and…actually you know what? I know someone who can articulate this way better.

Thanks Captain. Couldn’t have said it better myself. See you next month, folks.