This show started in 2017 following the lives of three strong women who are working at a fashion magazine called Scarlett. Each one is pursuing their own pathway in life with each other by their sides to help. It touches on the issues of feminism, female representation in the media; LGBT issues, politics and many more.

A comedy series following the lives of Erin, Clare, Michelle, Erin’s cousin Orla and Michelle’s cousin James – who happens to be English. Not only are they dealing with trying to navigate relationships; their Catholic girl’s school and their parents; they’re also having to deal with the troubles the 1990s brought to Derry, Northern Ireland.

One Day at a Time

A sitcom based around the Alvarez family, a Cuban-American family. With three generations of Alvarez women living under the same roof, there is bound to be some conflict as well as some amazing stories being told. Lydia, the grandmother, Penelope, the mother and Elena, the daughter are all very different but all similar in the way of them all being strong, powerful women who speak their minds. The show covers a lot of different topics that are important in today’s society in both a comedic way and a serious way as well. 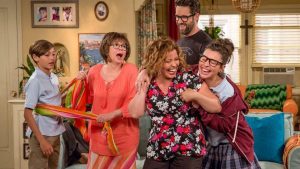 Orange is the New Black

Since the first season premiered back in 2013, this show has always been praised at its large, diverse cast of women portraying some of the most empowering, inspirational women on TV. Even if they happen to be criminals. As Orange heads into its final season there is no doubt in my mind this show will forever be known as the show that changed the way people watched TV as it was, and still is, Netflix’s most watched show. It was one of the first shows that had people “binge-watching”.

Watch on – Netflix (All Seasons) 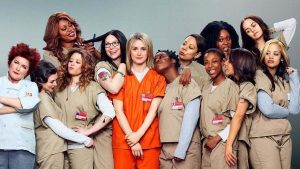 An unexpected stand out Netflix original from this year following the story of Otis who, despite his mother being a sex therapist, is extremely awkward about sex. After meeting Maeve – a confident, outgoing, yet vulnerable classmate – they set up a sex advice business helping students with their problems. This show definitely made a lot of people, especially women, feel more confident talking about sex and owning their sexuality as the characters in the show do. 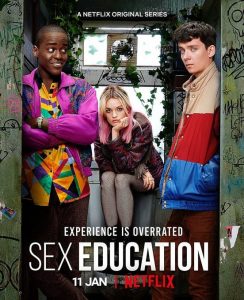 Two women who seemed to have lost everything become fast friends when they meet each other at a therapy group for widowers. Jen is mourning the loss of her husband who was killed in a hit-and-run; while Judy is grieving her finance, who had a heart attack. As this show is a dark comedy there are lots of twists and turns, but the main element of it is the friendship between the two women and how important that is to each other. 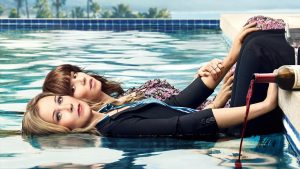 Based on the true story of Gypsy Rose Blanchard, a young girl confined to a wheelchair due to multiple illnesses with an extremely overprotective mother. While Gypsy tries to find more independence, she begins to rebel against her mother finally finding out that she has been lying about her illnesses as Gypsy was in fact healthy. This leads her (and her boyfriend) to kill her mother. Although this isn’t the most joyful thing, the acting throughout the show is amazing. 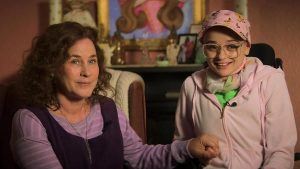 A classic spy thriller with a twist. The series follows a British investigator, Eve, trying to capture the slightly insane assassin Villanelle. While they are taking part in this cat and mouse chase, the two develop an obsession with each other. Not only is this a critically acclaimed TV show, the two lead actresses in it are both being praised immensely with Sandra Oh receiving two Golden Globe awards for this role. The showrunner of each season has also been a woman. 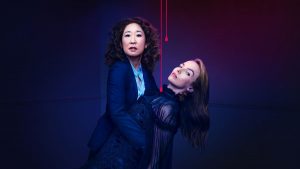 One of HBO’s biggest hits in the past few years; with murder, mystery and comedy set in the town of Monterey, California. Their community is fuelled by rumours the whole thing being divided into the people who have and the people who don’t. The series is told through the eyes of three mothers – Reese Witherspoon, Nicole Kidman and Shailene Woodley exposing broken relationships between spouses, families, friends and neighbours. 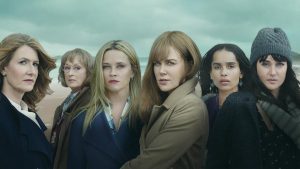 Set in Hawkins, Indiana in the 1980s. The laboratory near the town were performing experiments in the paranormal/supernatural. This included human test subjects – one of those being Eleven. They accidentally manage to make a portal to an alternative dimension – The Upside Down. The shows cast is extremely well known due to them being so young and so talented. 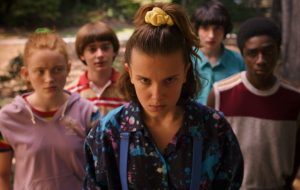