She didn’t really mind there being a ghost. At least when the concierge told her there was ‘rumoured to be a ghost’ it sounded sort of exciting, very Northanger Abbey. In the excitement of having her first place on her own, everything was shiny and new.

‘Top of the house, so you’ll get all the light,’ Ms. Holland said as she led her up the steps. For an attic flat it was surprisingly cosy, though the light was rather less than impressive. Perhaps because it was afternoon and it was late in the year; Ruby didn’t mind.

She told the girls so that night. ‘It’s very cute. Lots more space than you’d think in a single. I can’t wait for you to see it!’

‘Movie night at your place,’ Anjali crowed. The others quickly agreed. They were so kind to understand her moving out.

They were great gals, Ruby thought. It was just more difficult than she had anticipated sharing space after being an only child with a room of her own. Movie night was going to be fun. In the mean time, she had quiet.

It first appeared on the third night. Ruby had just begun to nod off when she saw something out of the corner of her eye. She might have dismissed it as a dream except she woke up just as the dawn light crept in and there she was sitting at the foot of the bed.

‘I’m so alone,’ said a voice so faint Ruby barely caught it.

‘Not anymore,’ Ruby said, then fell back asleep until her alarm went off. She shook herself awake and looked to the foot of the bed. Nothing. Perhaps it had been a dream.

That night as she watched television, flipping around to find a film, the ghost appeared behind the screen. ‘Hello again.’

The ghost passed through the screen, which Ruby thought pretty cool. ‘I’m so alone.’

Ruby patted the sofa beside her. ‘Come watch a film with me.’ It seemed the most sensible way to deal with a ghost. After a moment, the spectre slid onto the cushion. ‘This looks good, doesn’t it?’

They soon fell into the habit of watching programmes together, often far too late into the night. Ruby felt a little guilty at indulging in her movie habit. It wasn’t like she had one of the great streaming services even. But somehow it was soothing.

Anjali called. ‘Are you ready for movie night this week?’

Ruby felt a pang of dismay. ‘I’ve not finished unpacking yet.’

‘Oh, maybe next week. I’m just so disorganised.’ Ruby didn’t want to admit how much time she’d spent watching movies with the ghost.

‘Next week the holiday parties begin,’ Anjali reminded her. ‘It’s going to be crazy right through until we’re done.’

‘We’ll sort something,’ Ruby said, her voice sounding pathetic in her own ears. She didn’t want to let the gals down but somehow she couldn’t get started on the unpacking. The boxes still lay in a neat pile, ready to be emptied. It was always so dark here, even without curtains. She hadn’t bothered to put them up because there was no one to see through the windows up here.

‘Let’s watch a film,’ the ghost said, hovering above the sofa. Ruby lay down and started flipping through the channels.

She woke in the morning still on the sofa. The ghost was nowhere to be seen. Ruby reached for her phone and turned off the alarm, slightly disoriented not to be in bed. And still dressed.

In the office that day, Ruby’s feet seemed to be shod in lead. ‘Are you feeling all right?’ Charity asked her as she was refilling her coffee for the third time.

‘I think I’m coming down with something,’ Ruby said, rubbing her eyes.

But Ruby put her off with excuses. No good spreading her cold around, or whatever it was. Yet the days went by, no lurgy appeared, just this heavy feeling of uselessness that made everything seem like such an effort.

When Ms. Barrett called her into the office that Friday, Ruby worried that her performance had been slipping enough to jeopardise her position. Her trepidations were unfounded, however.

‘I want you to think about taking a new position in marketing,’ Ms. Barrett said with her usual brisk cheery. ‘There’s an opening in the new year as we’re expanding. I think that inventive mind of yours will be perfect.’

Ruby thanked her, twisting her hands in her lap. ‘Are you sure I’m ready?’

Ms. Barrett gave her a look that was both sharp and kind. ‘You ought to have more confidence in your work, Ruby. You know you’re good. Don’t be afraid to admit it.’

Ruby promised to think it over and let her know after the holidays. She skipped the holiday party that night.

‘Are you feeling all right?’ Charity and Anjali had her on the speaker phone. ‘You didn’t come to the party.’

‘Have you seen a doctor?’ Anjali sounded worried.

‘No, I’m fine. Just…tired.’ It took ages to convince them that she was fine and Ruby felt exhausted. The ghost sat at the little breakfast table she had not managed to use just yet.

‘You don’t want to make them feel bad,’ the ghost said. ‘Let’s watch a movie.’

That was pretty much how the weekend went, Ruby realised when Sunday night rolled around. Thank goodness she was off work because she could not face Monday. When her phone rang, Ruby planned to hit ignore but it was her mum. A stab of guilt struck her. It had been days.

‘Fine, fine.’ Ruby tried not to look at the half-emptied boxes.

‘Are you staying in the big city all during the holidays? Can we tempt you home?’ Her mother wasn’t manipulative, but she was still her mum.

‘I’ve still so much to do here,’ Ruby said truthfully. ‘I can’t seem to get it all organised how I want it.’

‘Are you taking your medication?’

‘Well, I think you might want to check your levels, darling. Things change. Stress levels and all.’

‘Just remember, sometimes you just need a foothold to start climbing that mountain.’

Ruby wanted to crawl through the line and into her mother’s arms. ‘I know, mum. Just don’t look up. Keep climbing.’

An old favourite film was on that night. ‘This seems so appropriate,’ Ruby told the ghost. ‘I’ve seen this a hundred times, I bet.’ Gene Tierney was so beautiful and if the ghost of the sea captain was a little too old to be sexy in her eyes, it was still a beautiful romance.

Or so she had thought the other ninety-nine times she saw it. Not Ruby felt irritated with the woman growing old just to become a ghost. She looked at the spectral shape next to her. ‘What’s your name anyway?’

The ghost’s black eyes met her and what there was of a face smiled. ‘My name is Ruby.’

‘No, it’s not. That’s my name. You have another name,’ she insisted.

The ghost sighed. ‘I don’t remember.’

Ruby looked at her phone. It was past three. ‘I’m going to bed.’ Maybe she would feel less tired and stiff if she actually got a good night’s rest.

In the morning the light woke her. That’s what I get for not putting the curtains up. Ruby rubbed her eyes and tried to figure out what seemed wrong about the light. She got up and looked out. The city was blanketed in white. Down in the square kids were throwing snowballs and building snowmen. She half expected to see an urchin hurrying by with a Christmas goose.

After a hot shower it seemed possible to get dressed. Ruby calculated the least possible stops she would have to make to take care of errands, then called Dr. Jansson’s office. She wasn’t in of course, but Ruby had an appointment after New Year’s.

As she came up the steps with her bag of groceries, Ms. Holland beckoned. ‘I’ll give you bagsy on this. That insufferable banker boy has come a cropper and gone back to Sussex or wherever it was he came from. I thought you might want to make a change. Come see.’

Ruby walked in and the light dazzled her eyes. ‘I know, it’s a bit bright this time of day, but it’s worth it these dark months,’ Ms. Holland said, staring out across the rooftops with satisfaction. ‘And the rent isn’t that much higher though you have a lot more space.’

Ruby felt like a cartoon character with a devil on one shoulder and an angel on the other. The ghost seemed to tell her not to risk it. But her mum’s voice said be brave. ‘Yes, I’ll take it.’

It would be easy to move the boxes she hadn’t unpacked. After a little repacking, Ruby started to lose steam. Despair started whispering in her ear, or maybe it was just the ghost. She grabbed her phone and called Anjali.

Sorted: the girls would come that night and bring movies. ‘But you’re making the popcorn!’ Anjali said with mock severity. ‘I’m so happy for you.’

Maybe she would even tell them about Ms. Holland’s offer.

‘You’re moving?’ The ghost’s cold mist brushed against her arm.

‘There are worse things than being alone,’ Ruby said, her voice gentle but firm. She took a box of kitchen things and went down to the new flat. The sunset bathed the sky with an orange glow. It wasn’t very Christmassy, but she liked it. 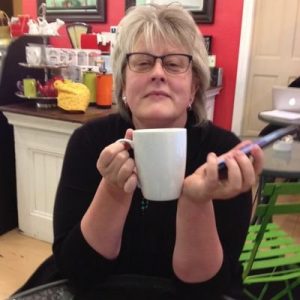