Have a look at Penny Miller’s (1979) wonderful ‘Myths and Legends of Southern Africa’ or, if you’re more academically inclined, try Nhlanhla Mkhize’s (1996) ‘Mind, gender, and culture: A critical evaluation of the phenomenon of Tokoloshe “sightings” among prepubescent girls in Kwazulu-Natal’ – via http://www.criticalmethods.org/bodtwo.htm 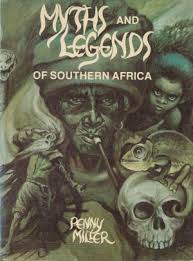 But, as for me, if you want the truth, the little monster called me to watch him…

The Tokoloshe smelt someone coming, even as the late afternoon air hummed with hot sun and clouds and a rainbow arch crumbled into a million dying pieces above his head.

Still, the river flowed strongly, swirling logs and leaves and dead fleshy things past him.

He stepped up onto the river bank to sniff the air, and he could smell the coming human was a she.

He grinned then, licking his sharp teeth, flicking fur out of his eyes and twisting his only garment, a leather strung hip pouch, into ready position. His witch would be pleased. The thick riverside bushes bustled with movement.

Ooh, a young smell. She whom he served would be very pleased.

He slung his penis over his left shoulder and fumbled in his pouch for his stone, but there was no time. The bushes burst apart and a skinny, dishevelled girl was staring down at him.

She looked tired and her trousers were torn, with both her legs bleeding.

I know, fuck those thorn bushes, he thought, but the girl’s eyes opened wide in shock and she shrunk against the bushes.

He licked his teeth again, slowly, waiting for her to turn and run.

But she stood firm, returning his gaze.

He grabbed his penis, flailing it like a warning whip.

Still, she did not run.

Either way, she was dead meat.

He leaped forward to grab her…

2 Replies to “African Monsters : The Tokoloshe by Nick Wood”