For the longest time I’ve struggled to finish books, to read something unrelated to Fox Spirit for my own pleasure. I am starting to reclaim that pleasure. Since I started out reviewing, I thought I might share my thoughts on those books I manage to complete here, with you.

I picked up The Night Circus after a number of friends recommended it to me. They were right! 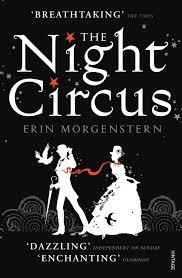 The Night Circus is beautiful, complex and enchanting. A story of multiple layers, based around a magical contest whose contestant are committed without their consent and not told the rules. The game must be played and they are tied to it until it is complete. Everyone who works for the Circus or falls for its enchantments is also, more subtlety but just as irrevocably bound to it.

The combatants actually show a frustrating lack of curiosity about the game itself, while as a reader I was initially impatient to understand it better. It isn’t long though before the book casts its spell in full and I was lulled into the nightly life of the circus, less concerned with how or when it will end but rather wandering endlessly down the ouroboros like paths, gawping and gasping as each new marvel is revealed, but never quite shaking the unease fully, knowing that something is not quite ok here.

Two magical prodigies battle, using the Circus as their stage and while Marcus and Celia work and spar their respective mentors manipulate and protect the secrets of their ego driven with little regard for who is harmed or at least forever altered by the process.

The writing is beautiful, the story gently compelling, the characters never fully revealed in their complexity, everything is done so beautifully. The Night Circus is a masterclass for aspiring writers in how to create an atmosphere with every aspect of the book that reflects the tale you are telling.

I fell fully under the illusions of this book, absorbing it, watching it unfold slowly like the living statues that adorn its paths. Holding my breath as the illusions unfold ever more intricate and dangerous. What will become of Marcus and Celia as the game inevitably concludes and can the circus survive? Why is Poppet no longer able to read the stars and what is the role of young Bailey in all of this. With workings more delicate than the complications of the Circus’ amazing clock this is a book that draws you in and binds you to it gently, from which you cannot simply walk away before the game is done.